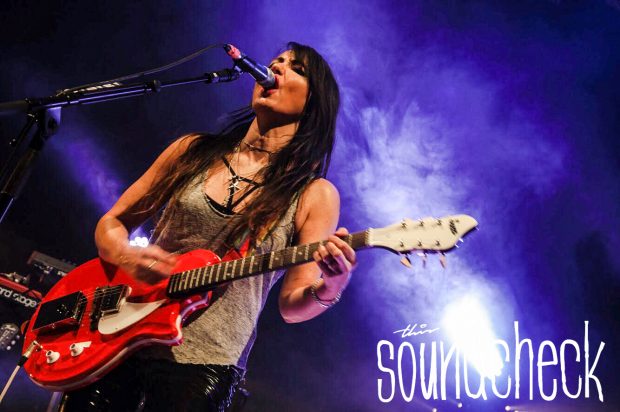 The award winning KT Tunstall rolled in to the UK’s second city in explosive style. Always a delightful experience, this time there is something different about Tunstall’s performance, and it is something good. Launching in to a rocking rendition of ‘In This Body’ from her brilliant recent album ‘Wax’, KT and her all-female band show a passion and vigour that proves to any naysayers that women can indeed rock.

Despite suffering from a deafness in her left ear (which caused some dates to be postponed last year) KT Tunstall seems to be the most confident and happiest she has been on stage for a long time – which really is saying something!

Second song of the night is the beautiful and dreamy ‘Other Side Of The World’ where she encourages the audience to hold their phone lights aloft. A quick glance around the packed out venue makes it feel like a million stars are dancing around, a truly magical moment to have so early in the set.

A quick mention must be given to tonight’s support act, the brilliant Laurel. Her blues rock set certainly set the tone for tonight. A young star who has a potential to take off in fine style. ‘Lovesick’, ‘Same Mistakes’, ‘Life Worth Living’ and ‘Adored’ were easily standouts and must have won over a whole host of new fans across the tour so far.

Returning to KT’s set, there a multitude of highlights tonight. Each song comes with a story about it’s conception or a hilarious anecdote which just proves what a “people person” Tunstall is, as she has an amazing ability to reach everyone on a personal level. ‘Uummannaq Song’, ‘Little Red Thread’, the gorgeous solo rendition of ‘Feel It All’ and ‘Heal Over’ are all sublime.

Her breakthrough song, the classic ‘Black Horse and The Cherry Tree’ begins as a solo rendition which evolves in to a full band cover of ‘Black Betty’ before exploding back to the main song. Executed in professional style, you realise what a great musician she is.

‘The River’ and ‘The Night That Bowie Died’ show two sides of KT’s dice but it’s the duo of ‘Dark Side of Me’ and ‘The Mountain’ which show off her new style and confidence in great harmony. Experimental compared to older material, KT really shines as she allows herself to indulge and get lost in the music. A final rocking ‘Saving My Face’ closes the set and leaves the audience craving more.

Not one to disappoint, KT and band return to the stage for an electrifying rendition of ‘Push That Knot Away’ which gets the room jumping and rocking along with her. Finally, we get a loud and explosive ‘Suddenly I See’ to close the night. Audience participation is a must when KT plays and never has an audience let her down. With a final “Thank You” and promises to see us soon, the band dance away as Cindy Lauper’s ‘Girls Just Want To Have Fun’ blasts out over the PA.

A star with such a varied back catalogue must struggle to put a setlist together without fear of alienating fans of all aspects. From the acoustic loveliness of ‘Eye to The Telescope’ and ‘Invisible Empire / Crescent Moon’ to the electro tinged ‘Kin’, the rock of ‘Drastic Fantastic’ and the gypsy rock of ‘Tiger Suit’ there is so much variety to encapsulate. The set tonight cuts out a lot of the bigger hits she has played for a while and varies it up with deeper cuts and newer songs from ‘Wax’. The set was refreshing and perfect. It will be exciting to see how the final album of “The Trilogy” will sit with the rest of KT’s back catalogue, but KT Tunstall is now a National Treasure who deserves everything she has earned.