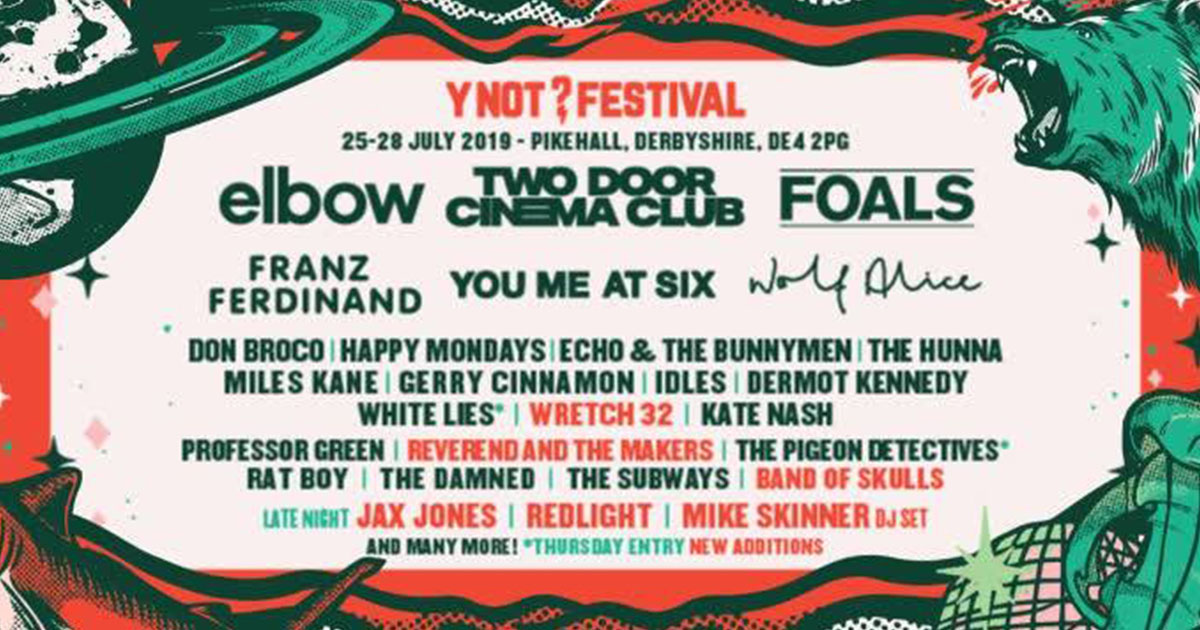 Derbyshire’s Y Not Festival has announced a whole new wave of incredible artists and comics to catch on the Main Stage and Flamingo Jacks – joining the already announced headliners Elbow, Two Door Cinema Club and Foals.

Added to an already immense line up of music for 2019 are Sheffield heroes Reverend and the Makers, The Streets’ frontman and icon in his own right Mike Skinner (DJ set), rock duo Band of Skulls and one of the world’s hottest new DJ acts; Jax Jones.

Bringing buckets of laughter to the Peak District are the one of UK’s finest collection of comics. On the bill is Never Mind the Buzzcocks’ hero Phil Jupitus, BGT’s hilarious Lost Voice Guy, smooth-talking stand-up Simon Evans, comedy queen Shappi Khorsandi, as well as Mo Omar, Thomas Green, Andre Vincent, Ramond & Mr Timpkins, Daniel Muggleton, Kelly Convey and Thomas Green. All of this and an unbeatable music line up are at this year’s Y Not.

Heading over from nearby Manchester are the lovable Elbow. Irish indie trio Two Door Cinema Club also have some unfinished business for Y Not Festival. As returning headliners, they’re bringing their A-game this summer and some brand new material along the way.

Returning to the spotlight – rock heroes Foals will be finishing an unbelievable weekend of music, choosing Y Not to play as part of their limited run of UK shows in their big comeback year. The full line up is revealed as follows:

With weekend tickets almost Sold Out, this will be a great weekend in the middle of Summer for some live music fun. Be sure to book your tickets asap via the website.