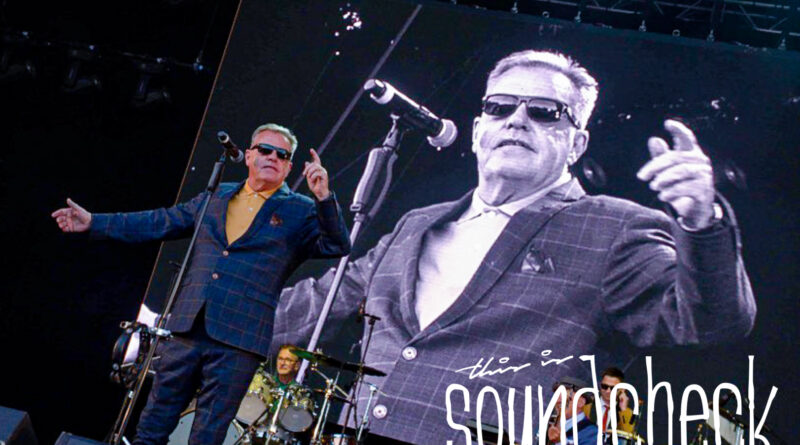 Ignoring a ticket mix up on the gate (Some confusion with a 90’s fest) and also ignoring the impossible task of trying to find somewhere in the medieval city to park, what better way is there to end the working week than having a drink and a singalong with “The Nutty Boys” in a field on the banks of the River Severn under a summer sunset?

Warming up for Suggs and Co. The Hoosiers open proceedings and can be heard across the city as the masses are coming from the station and various bars, making their way to The Quarry on the banks of the River Severn. Hits such as ‘Worried About Ray’, ‘Cops and Robbers’ and ‘Goodbye Mr A’ start the night off easily with some subdued singalongs whilst the audience find their voices . Scouse royalty The Zutons are next up and deliver a punchy set filled with hits a plenty including the original (and the best) rendition of International hit ‘Valerie’ made famous of course by Amy Winehouse. Other hits such as ‘Why Won’t You Give Me Your Love?’, ‘Zuton Fever’, ‘Pressure Point’ and ‘You Will, You Won’t’ go down a treat.

Running roughly 15 minutes late due to the earlier ticket mix-up, Madness arrive on stage at 8:45 sharp and are already in a jubilant and playful mood. As is always with a Madness show, you can expect songs, banter and a damn good time. From the first word out of Suggs‘ mouth, the fans instantly know what is coming and speak his part along with him and the band launch straight in to ‘One Step Beyond’. Saxophonist Lee Thompson leads the band with his mix of solos and funny facial expressions towards the front rows. ‘Embarrassment’ comes next and leads in to ‘The Prince’ which sees the giant video screen behind the bands display photos and footage of Prince Buster.

Suggs is in fine form tonight and decides to tell a recent story of being in Newcastle having a drink: “So I was in the bar and next to me was Johnny Depp! He says Suggsy, can I get you a drink? Of course I can’t refuse. We sit down and he starts crying… I say Johnny, what’s wrong? Well Suggsy, my girl’s met a man…” and the band fly straight in to ‘My Girl’.

The set features a mass of hits as you would expect from a band of their status and caliber. We get some recent tracks, and some rarely performed tracks also. ‘Wings of A Dove’, ‘Shut Up’, ‘Bed & Breakfast Man’ and ‘Mr Apples’ are great, but then make way for a slew of back-to-back hits that sees The Quarry come to life. ‘House of Fun’ sees the beginnings of the dads dancing like a toddler taking their first steps, ‘Baggy Trousers’ sees more of the same with the majority of the audience calling out the “Baggy Trousers!” refrain throughout.

Suggs addresses a youngster on the barrier at the front and advises him to get an education otherwise he’ll end up like Mark Beford (Bass) – all in good jest of course. ‘Our House’ sends even more of the audience ecstatic and sees the army of Fez wearers come to the front and join in with the bouncing along. The set closes on a wonderful and joyful rendition of Labi Siffre’s ‘It Must Be Love’. The giant video screen projecting the band but filtered over with falling red petals turning in to a giant heart at the close was a lovely touch.

Of course they return for an encore. Suggs addresses the audience asking if they are still there, the audience respond. Suggs turns to his band mates in a joking way and says “I think we must be abroad cos they can’t understand me… I said are you still with us Shrewsbury?” The response is even louder. They spell out the word Madness and as the audience gets the connection and cheers along, they launch in to their cover of Prince Buster’s ‘Madness’. Wonderful, joyous and hilarious all the same.

Finally before the last track there is a lot of calling out for various fans favourites. Suggs states that we all have homes to go to and of course thanks us for coming and spending our Friday night with the band. As he steps away from the mic, the adorns a tea towel on his head, the sax blasts out to replicate an old steam ship and then of course the band launch in to ‘Night Boat to Cairo’. Huge shouts of jubilation from the audience as they jam along and dance around with family and loved ones.

Madness were perfect in this setting. Mid summer evening, warm temperatures, huge crowd, everyone in a relaxed but party mood and the drinks were flowing. Always a great set and no one seems to be left disappointed. Great, great fun.