A record store in Chicago called Shake, Rattle And Read is closing its doors after 50 years of trading and is giving away its entire remaining stock for free. Customers can take as much as they please during their business hours between May 23-24 2016.

The shop’s owner Rick Addy has announced that due to online streaming & sales, it is impossible to continue trading unless they continue to trade online. The shop’s Facebook page read “Bring your own boxes and bags between 12pm-6pm tomorrow. EVERYTHING WILL BE FREE, you can take as much as you want.” 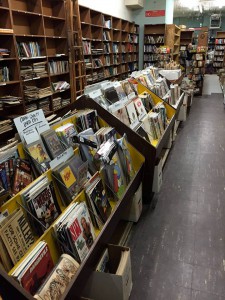 A viewer on Facebook even asked the Chicago store if their shelves were being removed. She got the prompt reply of, “Yes, tomorrow a couple of guys are coming by to take some of the bookshelves out… They are 8 feet high maybe 4 feet across. They have been there since 1966.”

It is an unfortunate and heart-breaking chain reaction between record mega-stores and their relationships with small independent record stores. In 2007, Virgin Megastores were sold and virtually non-existent. Since then, we have seen the very quick decline of independent record stores. Due to the world’s ever expanding technology, 1 in 3 people do the majority of their shopping online, resulting in the suffering of most independent shops and their owners.

A plea went viral in 2015 for more people to save independent stores by shopping locally and ignoring the international stores.