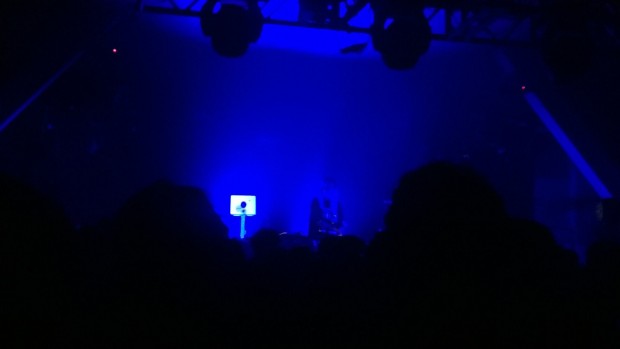 BANKS’ star is definitely rising. She hasn’t even released an album and yet she’s already got an almost sold-out tour of the UK. The Library in The Institute is jam-packed; like sardines in a tiny tin, which is not good when the the crowd seem to be fans of the bump-n-grind. The support act is Clair Stirling, AKA Radio 1 DJ Eclair Fifi from Edinburgh – she’s got a good thing going on.

After Eclair Fifi, we don’t have too long to wait before smoke fills the stage and the bass of ‘Before I Ever Met You’ kicks in. It’s thumping, straight into the heart. The “ahh”s at the start are so intriguing that nothing can be done but to just stare as she slinks onto the stage. She’s in total silhouette pretty much throughout the entire song, which makes the whole feeling of this totally ethereal and so mysterious, and an occasional strobe light only adds to this. It’s exactly what you would expect from BANKS; thoroughly intense. She prowls around the stage and it sounds as though her voice is coming from every direction.

‘This Is What It Feels Like’ was always going to be good live, but this was something else. Once again, the bass is so intense that it feels as though it’s in the very centre of the body. Everyone in the room gets excited as soon as she announces the title, and she encourages everyone to sing it back to her – the room is more than happy to oblige. It’s really quite special. ‘Change’ is very emotional simply due to the nature of the song. It’s much more intense in person, especially with everyone singing it back to her again. It’s quite clear that it’s totally from the heart, and she makes an effort to make eye contact with random audience members, which made the track that little more personal.

Next up is new single ‘Brain’. Once again, she’s slinking around in this very dramatic, intimidating way, like when a snake is just about to devour its prey. She gears herself up to the “big” bit of the song, and when we get there it’s like an explosion of sound. You can see she utterly believes everything she’s saying. She then introduces the next song, ‘Goddess’, by explaining that she used to really struggle with confidence and didn’t like the way she looked, but got over it and invites us all to do the same, saying that we are all goddesses. Once again, it’s just a really nice personal touch, showing that she’s still a down-to-earth person. She gets a bit of sass on whilst she’s singing this one.

‘Bedroom Wall’ brings things back down, it feels stripped back as it’s another emotional one. Again, it’s from the heart and she manages to connect with everyone in the room. She seems totally vulnerable but it only makes us love her more. ‘Fall Over’ takes us back to the mysterious, ethereal feel of the gig – it’s just voice and piano, which shows off her vocal abilities. It’s got the feel of a smokey jazz bar, a totally different feel to the recorded version. ‘Warm Water’ is also stripped back in this way, and is also more of a jazz version. It surprisingly totally suits the song and her.

They then do a cover of Aaliyah’s ‘Are You That Somebody’ that they performed in the Radio 1 Live Lounge this week. It just shows how versatile BANKS is that she can cover an R&B track like this. She’s totally flirting with everyone in the audience and slithering on the microphone stand – gaining a few wolf whistles from the men in the audience who were surely loving it! Things go back to the ethereal with “Waiting Game”, but she fires it out – it’s fierce. The use of strobes and smoke again makes this very intense and totally mesmerising. It’s a great way to end the show.

EXCEPT… there’s an encore! BANKS and her gang opened for The Weeknd recently, and so they close the show with a cover of “What You Need” – it’s a stripped back version which totally works with BANKS as she makes it her own. She also retains the emotion that has been present throughout the gig.

All in all – perfection.