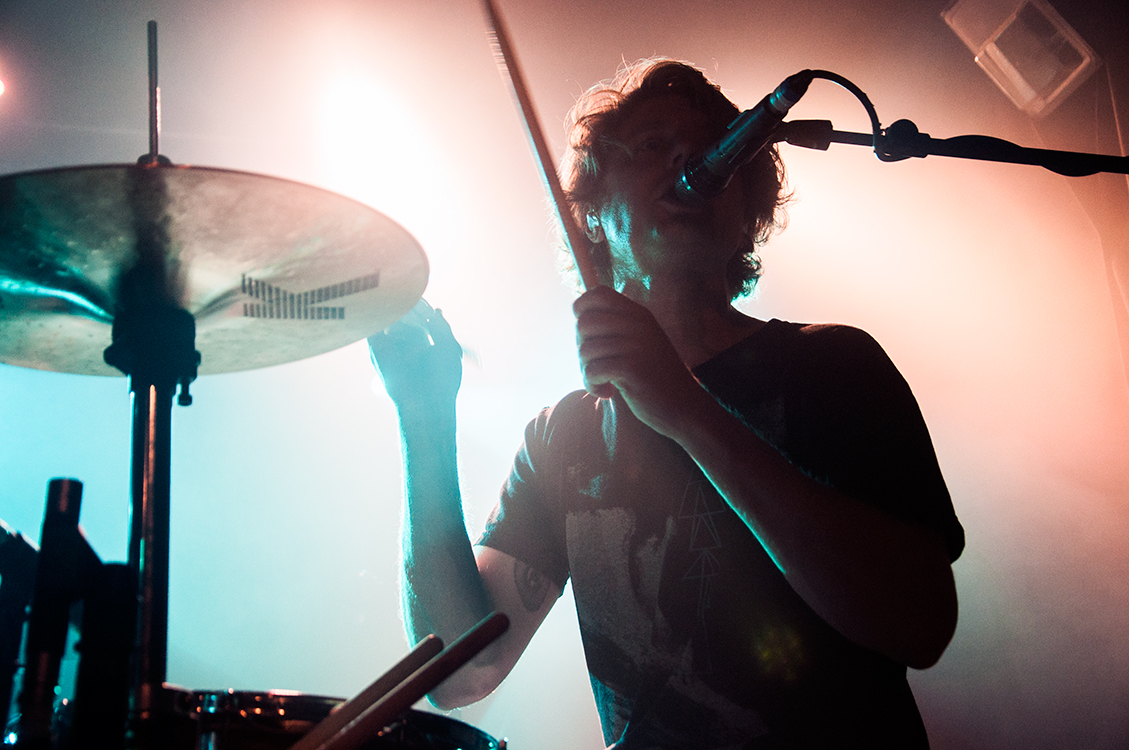 Having released an absolutely cracking fourth album last month, Brighton’s Blood Red Shoes have returned from a Sold Out European tour to promote the record on home turf. Tagging along for the support on this run of dates are The Staves and DZ Deathrays.

Tonight starts with the wonderful duo that make up Slaves. These boys are great fun. Hailing from Tunbridge Wells and producing the most sublime rock n’ roll the town has probably given birth to in recent years. Tracks like Girl Fight literally slap the audience in the face. They were great fun albeit seemed a bit lost on the subdued audience unfortunately.

Next up were the crazily titled DZ Deathrays. Barely speaking between tracks, the Australian duo just let the music do the talking. High-octane and energetic, trashed rock n’ roll was served as another apetiser. There did appear to be a couple of minor sound issues during this set which lead to the overall outcome sounding incredibly fuzzy and towards the end of the set, vocals barely audiable above the screeching guitars. However, this added to the fun and with their debut expected to drop in August, these are ones to watch out for.

The issue with the sound desk resulted in Blood Red Shoes arriving just over 10 minutes late on stage, this did nothing but add to the performance however. Front woman Laura-Mary Carter picked up her guitar and hid behind her hair for the opening track Welcome Home. Drummer Steven Ansell is an absolute delight to watch live. His enthusiasm in drumming is impressive along with his ability to sing is a talent to behold.

A major selling point with this dynamic duo is having two talented singers who don’t try to outdo each other. There were many highlights tonight. Don’t Ask and Light It Up sounded heavier than previous incarnations. Newer material like I Wish I was Someone Better, Speech Coma and This Is Not For You equally as impressive and a welcome addition to the setlist. First single from the recent album The Perfect Mess caused a rauchous uproar from the fans at the front. Recent single An Animal having one of the best riffs in a while, completely floored the room.

Cold and Heartsink were probably the dirtiest riffing Laura-Mary produced tonight along with an absolutely stunning Colours Fade to close the set. Again Steven’s drumming sounded thunderous, combined with the textured tones from the guitar, drew a mouthwatering close to an epic and highly charged set. Without a word, they leave the stage with Laura’s guitar placed against the amp causing feedback to ring out.

Returning after a couple of minutes of dimmed light and a beautiful moment of continuous feedback, we are thanked for attending and introduced to Cigarettes in The Dark again from the recent self-titled album. This track took on a new life as the fuzzed up feedback in the guitar tones mixed with the sound of live drums seemed to both strip it back and excell it from the recorded version.

Red River from last year’s ‘Water EP’ arrives next. This segues in to a very frought version of Je Me Perds to complete the set. As Steven was drumming the outro, Laura begins to attack the kit with her feet whilst soloing in to more feedback. She continues to attack the drums restulting in them being pushed over and finally throws her guitar towards the floor before they both leave the stage without saying a word.

A set of mixed feelings. Something didn’t fully gel tonight, but at the same time, made the set spectacular. Whether it was the sound issues that caused them to drop a couple of songs from the set, or whether a slightly subdued crowd didn’t help them connect, something seemed to affect the duo. Regardless, that was still possibly one of the gigs of the year so far just for energy and atmosphere alone. Let’s hope they will not be put off coming back to the Midlands for a while after the sound issues.