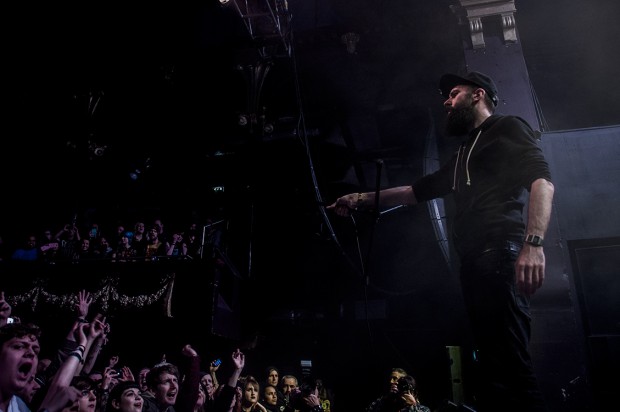 The night kicked off with the sublime talents of Sarah Williams White, just her and a keyboard full of sounds, samples and beats that Thom Yorke himself would coo over. Her criminally short set picked up pace with a heartfelt performance of ‘Your Silence Is Killing Me‘. Up next was young rapper Itch, bringing along a grown up crying baby who was allegedly ‘6 months old’ yet could sample and mix like no one’s business. Set highlights included a high energy run-through of ‘Homeless Romantic‘ and an in-the-crowd-let’s-party performance of ‘Best Shot‘. Needless to say by the end, the crowd were eager for the headliners.

As soon as the lights dipped, Dan Le Sac walked out to a gigantic reception and kicked the beats off. Waiting in the wings, Scroobius Pip began the frightening ‘Stunner‘ then launched himself into the centre of the stage amidst some dark lights, but like a ball of energy. The momentum did not stop, seguing nicely into ‘The Beat That My Heart Skipped‘ and finally in to ‘Sick Tonight‘ complete with Scroobius Pip spitting the lyrics out in unison with the entire crowd. Pip finally addressed the crowd and acknowledged the fact that not only was this the biggest venue on this current tour, it’s also the biggest headline date they have played.

Both Dan and Scroobius were in a joyous mood and interacted with the crowd throughout the set. When the house lights came, Dan made a comment about a guy in an English Rugby top at the back of the venue because he was playing on his phone through every song. A couple of songs later, Dan looked up to the balcony and egged a gent to remove his shirt, he needed no further encouragement and within seconds was swilling it around his head before dropping it over the edge and standing bare chested for the masses. (A band t-shirt was soon sent up to the man as a token of thanks from the duo).

With a crowd in such a party mood, it is always risky to attempt slower and more meaningful numbers, but not everyone can carry it off like the enigmatic performer such as Scroobius Pip. Pulling up a comfy armchair from the back of the stage to the front, sitting in it then taking us through the highly personal and incredible ‘Terminal‘ off their new album released last year, a quick glance around the room could see how everyone was captivated and hanging on every poetic word.

We also get both support acts joining Dan n’ Pip throughout the set; Sarah Williams White coming on to sing ‘Cauliflower‘ and Itch coming to perform the recorded duet of ‘Stiff Upper Lip‘. Other highlights from the set include a frivolous and very bouncy rendition of ‘Get Better‘, recent single ‘Gold Teeth‘ and set closer ‘Thou Shalt Always Kill‘. The latter still being on the shortlist for the most truthful and witty song of the last decade without fail.

The encore begins with ‘Introdiction‘ followed by both Dan and Pip thanking us for coming out tonight, the continued support and acknowledging the great atmosphere in here tonight. Finally they close off with the stunning ‘A Letter From God To Man’. Again, another piece of sublime poetry from Pip and something so meaningful that it makes sense the more you hear it. Dan’s fat beats dropping behind the lyrics and pushing the track along to a shouted and passionately performed conclusion. Sroobius Pip bids us farewell and exits the stage. Dan then takes a moment to himself to lead the crowd into a semi re-working of The Prodigy’s ‘Voodoo People‘ as the lights come up. The majority of the crowd stay in until the song finishes. Others who left just before though were greeted to the sight of Scroobius Pip making his way out of the venue on to the streets to meet fans, sign autographs and take pictures. A band who really do respect and love their army of fans.

This weekend, Dan Le Sac vs. Scroobius Pip have announced an additional run of dates in April which will be their “last for a while besides the odd festival show”. If you can, get down to see this incredible duo while you can.