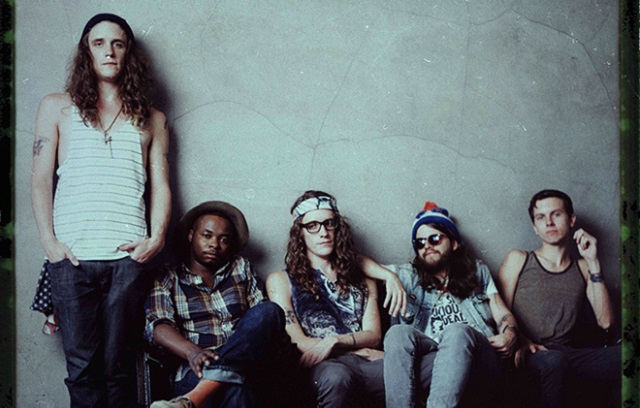 A packed-out crowd has fought its way through howling wind and rain to fill The Institute’s Temple Bar this evening. There’s already a sense of excitement building, the chatter and laughter echoing across the room as gig-goers stake their claim on what little space there is around the congested stage. After fighting your way along a dark and blustery Digbeth High Street, this probably couldn’t feel much further from the stagnant warmth of the bayou, but, at least for tonight, Mississippi-natives The Weeks have brought a taste of the American South to the people of Birmingham.

Before that, though, comes a thirty minute set from Hull boys Audio Subscene. Their sound, a raucous mix of Brit-pop and stadium rock, is clearly music to the ears of the full room they’re playing to. Performing, amongst others, several tracks taken from their new EP Tales of a Twisted Time, they’re greeted with an enthusiasm that goes beyond mere politeness. The crowd are lapping it up, and given that the band’s performance is energetic and musically tight, they have every right to leave with a few more fans than when they started.

The warm-up over, The Weeks take to the stage amidst a cacophonous mixture of cheers and applause. From the first note, they have the crowd in the palms of their hands, kicking off their set with the title track from most recent album, Dear Bo Jackson. Old favourite ‘The House That We Grew Up In’ follows, launching what will be an hour-and-a-half of slick, Southern Rock.

Making full use of the relatively compact stage, the band are full of an almost anxious kinetic energy. Vocalist Cyle Barnes, with so little room to maneuver, channels this instead into his stunning vocal performance, raspy and impassioned in the anthemic heights their songs create, and yet capable of understated soulfulness in the quieter moments. The rest of the band never drop a beat, dancing, pogoing and always building up the air of infectious excitement that fills the room.

While much of the set is drawn from Dear Bo Jackson, the response to new and old alike is one of unrelenting adoration. From the laid-back rock of ‘King-Sized Death Bed’ to the quick, sharp rock’n’roll of the Rumspringa EP’s ‘Heard It All’, their fans know and sing every word. Guitarist Samuel Williams is in his element on the latter, a typical example of the incredible technical skill that backs up the band’s laid-back style. Slower numbers like ‘Gobi Blues’ and ‘Slave to the South’ provide brief moments of respite amongst a playlist that demands as much energy from the gig-goers as it does from the band themselves.

As the main set draws to an end, the crowd’s energy finally overflows. For closer ‘Steamboat’ people are hoisted up onto shoulders, fists raised triumphantly in the air as the floor begins to shake to the rhythm of 600 feet. Even before they are off the stage, the call for an encore begins. The thin strips of neon illuminating the stage are enough to reveal the wide smiles on the band’s faces as they resume their positions. Closer ‘Buttons’ builds from its simple but incredibly catchy opening to a chaotic, frenetic ending, the band’s energy exploding in one final, shambolic outburst as the crowd sings every word.

They may have first come to people’s attentions because of their associations with the Kings of Leon, but after tonight it seems fair to say that The Weeks are more than ready to step out from under that shadow and take centre stage. Judging from the rapturous reception they’ve received, it’s the least they deserve.