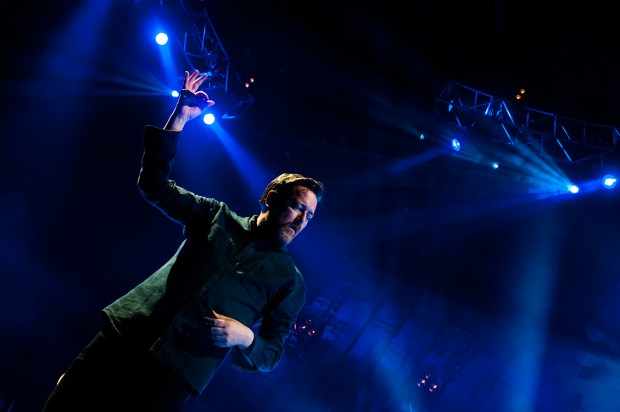 ELBOW kicked off their UK arena tour in fine style last night. Complete with a mini orchestra, Guy Garvey and co pulled out all the stops to deliver a nearly 2 hour set.

Fresh from his warm up show in Stoke the night before, Jimi Goodwin started the proceedings with a 45-minute set completely of tracks from his debut album. Terracotta Warrior as the opener sounded grand in the arena setting, it’s bassline thumping out across the crowds. The likes of Didsbury Girl, Man v Dingo and the closing Lonely at The Drop all complete with their slight dance elements seemed to lure the crowd closer and make more than a few feet tap on the floor. Despite the nerves and admitting this on stage, Jimi played another flawless show, Jamaican accent aside [for those who were there- ed].

As 8.45pm rolled around, the lights dipped and The Blue World was played over the PA as the orchestra took their places and subsequently joined in with the song. Moments later, Elbow arrive on stage, beer glasses aloft. Guy Garvey stands at the tip of the runway and then proceeds down the ramp and into the portion of the runway set in the crowd, again raising his drink aloft and greeting the crowd almost individually. It is this charismatic charm that propells tonight.

Starting with the mighty Charge from new album the ‘Take Off and Landing of Everything’, it seems the band and audience are in the mood for tonight. Guy Garvey paces the stage, prowling like a caged animal, reaching out towards, and pointing to members of the crowd. It is the little things like this that help to make the audience feel intimate. The Bones of You arrives next and again sees Garvey transversing the runway to bring himself closer to those deeper in the audience.

The new album sees a good outing tonight, Real Life (Angel), New York Morning and Fly Boy Blue/Lunette sound incredible and a lot rawer than the album versions. Where the last album seems to have missed something from the final production, it sounds so much more alive on stage.

Both ‘The Seldom Seen Kid’ and ‘Build A Rocket Boys!’ see the best portions of the set dedicated to them. Old favourites such as Mirrorball, The Loneliness of A Tower Crane Driver, The Birds and The Night Will Always Win are greeted like old friends. This is probably the only gripe with the set and the issue that has plagued Elbow for the last decade; the first 3 albums are hugely overlooked. Tracks like Red, Newborn, Grace Under Pressure and Fugitive Motel could very easily slip in to the set and offer a little divergence to those who are not familiar with those classic albums.

Between song banter tonight is brillinat. If ever Elbow begin to wain in popularity, Guy Garvey could turn his charm to stand up. We get anecdotes from the band’s life backstage including Colin’s moisturiser mishap, tales of babies arriving, the audience shouting out their names and then the threat from Guy of turning the shouts in to message tones. We also get Mirrorball dedicated to those on a date, especially a first date at the gig tonight. “I know, let’s take her to see Elbow, that’ll be a cheery first fucking date won’t it” beams Guy full of smiles as the band launch in to the aforementioned track.

The set closes on a stunning and vibrant version of Grounds For Divorce, followed by the sublime My Sad Captains. The break between the encore sees the cameras picking out members of the audience, all of whom seem to take a second to realise they are on the main screen. The ‘Best Reaction Award’ has to go to a young man who seemed to be no older than 8, who instantly saw himself, began waving with a big grin before deciding to stick his fingers in his mouth and pull a monster face – cue a barrell of laughs and cheers from the entire arena.

After a quite lengthy break, Elbow return to the stage, pint glasses refilled and again held aloft. The encore kicks off with a stunning rendition of Starlings. Garvey’s ability to hold the entire audience in the palm of his hand and command anything is remarkable. The whole arena begin swaying their arms from left to right in unison, a sight to behold. Lippy Kids arrives next and even sees a number of people trying to “shush” others as it is played out. The absolute perfection of this song shows off Garvey’s understated vocal range. The call/respond whistling is something that you have to witness, again, flawless.

The show closes on an epic version of One Day Like This. How could it not? Admittedly, it seems like a good third of the audience were here just for this song alone. Garvey paces up and down the runway, stepping down to greet members of the audience and at one point take a sip from someone’s pint offered to him. The whole band join him in bidding farewell to the crowd and again we are thanked for making the first night of the tour very special and memorable. Oh, and not to forget, the show was being recorded – audio and visually. For what purpose, we are yet to discover, but to see some of that show back is a must.