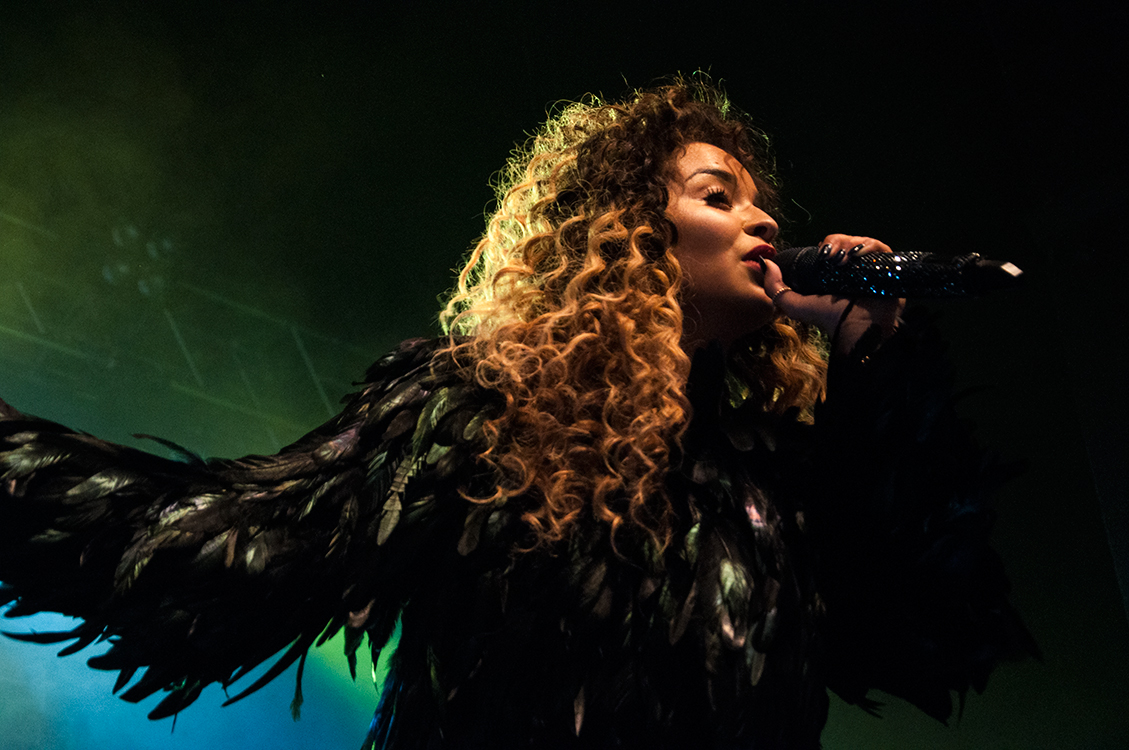 Ella Eyre is kicking off her new UK tour tonight in the middle of Digbeth at Birmingham’s own The Institute. It’s no surprise that the young singer sold the venue out after playing a well-received set at Wireless Festival this summer, and with her own material gaining more and more support, this was acting as a preview for the debut album due out early 2015.

Joel Baker starts tonights proceedings off with a wonderfully cheeky set of songs of love and loss. The young man certainly warmed a number of teenage hearts as he declared he had recently suffered a break-up and proceeded to defy logic of writing a song about hating her, but how he will always remember the best things about her. Next up was wonderful talent, Miss Kimberly Anne. Having caught Kim before at festivals and other support slots, it was great to see how her sound had developed. Now touring with a drummer and an array of instruments, this has certainly beefed up her sound and confidence. Both acts seemed to go down well a treat with the audience, but of course, it wasn’t them they were waiting for.

Arriving on stage just a couple of minutes later than scheduled, Ella Eyre and band kick off with the energetic ‘Wrong About me’. Dressed in an overcoat of feathers, you could be mistaken as interpreting this as her tribute to the forthcoming ‘Hunger Games: Mockingjay’ movie, underthis she wears simply a pair of leggings and a sports top. Ella’s vocals instantly making an impression and wowing everyone in the room from young to old. Second song ‘Time’ see’s the starlet rooted to the spot with her sparkly microphone stand, but in typical fashion, this isn’t for long because she is soon bouncing from left to right across the stage again.

This lady has it all, the voice, the moves and the full shebang. Her energetic performances without losing a breath are seeing comparisons to Beyonce coming through, but the soul in her voice would dictacte more of an old skool comparison from us. The likes of Gladys Knight and Aretha Franklin spring instantly to mind as she powers through the ballad ‘Bullet For You’ and even a cover of the disco classic ‘We Don’t Have To Take Our (Clothes Off)’.

Samples from her debut album show that there is more to come from this young lady. Even dropping her Rudimental duet ‘Waiting All Night’ in two thirds of the way through the set is a bold move, but works so well as it shows the belief is coming through in her own material. Finishing the main set on a cover of Sigma’s ‘Changing’ leaves the audience begging for more. Not one to disappoint, Ella and band soon return to the stage and offer up a delicious two song encore for the opening night crowd.

Starting off with ‘Home’ we again see the entire room bouncing and singing along like there is no tomorrow. The atmosphere in the room is that we are witnessing something special, and indeed we are. After thanking us for coming out and making the opening night so good, Ella bids us farewell and promises to come back soon – most likely once the album is out – She finishes on her biggest solo single to date, ‘Come Back’. The room goes off in fine style as Ella and audience make the moment euphoric and the roof is lifted off the intimate venue. A perfect poppy night out with someone who will be a star for many years to come.