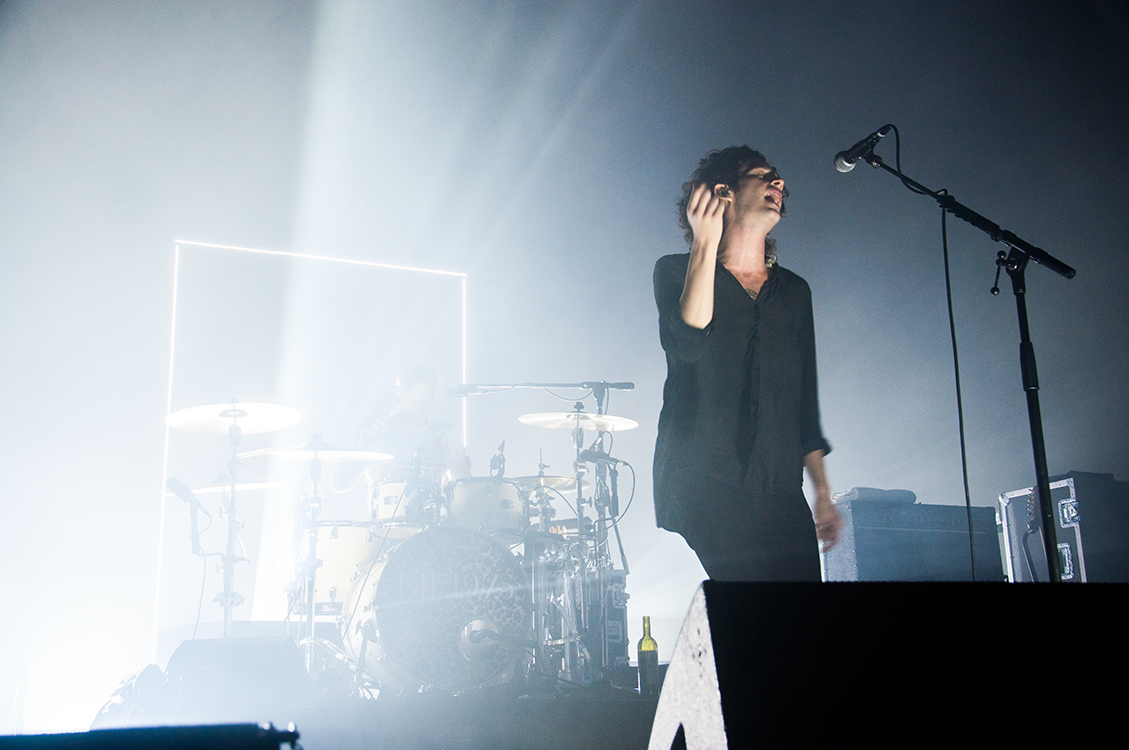 After what seems like the longest 18 months playing up and down the country as well as all over the world plugging their frivilous debut album, you would expect THE 1975 to sound tired and stagnent. From the moment the lights dipped in the Civic Hall tonight, there was absolutely no need to worry about any quality of performance at all.

Tonight kicks off early with first support band, Manchester’s own Y.O.U. who offer a funked up slice of dance, electronica and indie. A perfect mix for warming up the young audience tonight. Following the Mancunians are up and coming fellow youngsters Circa Waves. Their high energetic pop-punk-indie went down a treat. Opener ‘Get Away’, ‘Stuck My Teeth In’ and new single ‘So Long’ sounding fantastic and proof why the hype should be believed.

Finally, time for the headline act. Kicking off with ‘The City’, it was clear to see that both band and audience were up for a good time. The 1975’s frontman, Matt Healy, who is sporting his new long shaggy hair style instead of his iconic punk rock cut bounded effortlessly across the stage. His interaction with the crowd throughout the set was minimal, but when he did address the 3,000 in attendance, it was greeted with screams of adoration from the predominantly young crowd. He made the extra effort to make one young fans’ evening when whilst addressing the crowd, she was lifted over the barrier by security and as being escorted away, was asked to come back so he could touch her hand.

Despite being released last year, the set was made entirely from album tracks and bsides from the debut album. Expecting to sound tired and stale by now, there seemed to be a new breath of life in the band compared to earlier this year. Tracks like ‘M.O.N.E.Y.’, ‘Settle Down’ and ‘Pressure’ seemed rejuivinated. Slower numbers like ‘Me’ and the gorgeous ‘fallingforyou’ completely melted the room with their silky smooth undertones and Matt’s heavenly vocals.

The main set concluded with the couplet of ‘Menswear’ and ‘Girls’, both leaving the crowd hyped up and not wanting to let their idols disappear so quickly. The wish was granted when barely a minute later the band arrived back on stage and launched straight in to an upbeat version of ‘Robbers’. Matt took a moment afterwards to address the crowd once more and explained how this was the biggest tour of their career to date and they were loving it! He also declared that this was the first time they had visited the Midlands venue and hoped they would return in the not too distant future.

Finishing the night off with penultimate track ‘Chocolate’ saw the entire room including the balcony up on their feet and bouncing. The crowd were in fine voice and seemed to out-sing Matt on more than one occasion. As the track finished we get a solitary ‘Goodnight… Sex!’ and the band segue into the final track of the night, ‘Sex!’. As a good third of the audience saw this as a cue to leave, the remaining fans enjoyed a final bounce around and singing at the tops of their voices. As the band walk off stage, there was only Matt left at the edge of the stage swigging from his ever present (and often refilled when empty) bottle of wine smiling adoringly at the audience before spinning his arms out and swirling off stage.

A rather enjoyable evening out seeing one of the better bands from last year perform their hearts out. Let’s hope that the record label give them a rest now before they knuckle down for album number two.