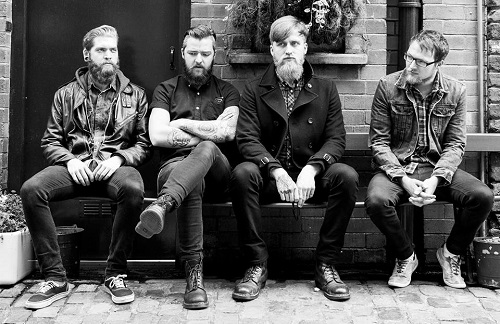 Movember may be just a distant memory, but it looks like nobody bothered to tell Liverpool post-rock quartet F.O.E.S., who release the video for their new single ‘Ningyo’ today. In their downtime from looking like a casting call for Fisherman’s Friend, the band have already earned some impressive support slots with the likes of 36 Crazyfists, The Icarus Line, and Hacktivists. Their sound has already drawn comparisons with Circa Survive, Deftones, and At the Drive-In, and while they may not fully conjure up the chaotic brilliance of those bands with this latest release, ‘Ningyo’ strikes a delicate balance between the skittish distortion of the former, and the delicacy of Chris Mackrill’s lead vocals.

[quote style=’1′ cite=”]”Ningyo is a little removed from everything else we’ve done. There’s a lot of bittersweet in there, so we really wanted the track to be all about the bare vocal and Chris’ lyrics. It’s a step away from the usual frenetic sound of our band.“[/quote]

It’s this bittersweet element that the band so brilliantly capitalise upon. After the tranquil opening, with Mackrill’s voice wavering over gently picked guitars, the rhythm section suddenly kicks in. While the vocals remain much the same, they gain a sense of urgency from the mismatched beats that rise and fall around them. Drummer James Lorenzo’s frenetic yet well controlled off-beats add a sense of unpredictability to what began as a sweeping, emotive piece of alt-rock, instantly transforming it into something far more engaging, far more exciting.

It already looks like 2014 is shaping up to be a big year for F.O.E.S. With a UK tour and EP release scheduled for February, they should soon be making their presence felt far beyond the confines of Merseyside. If they sound half as good live as they do on record, they’ll be making very big waves indeed.