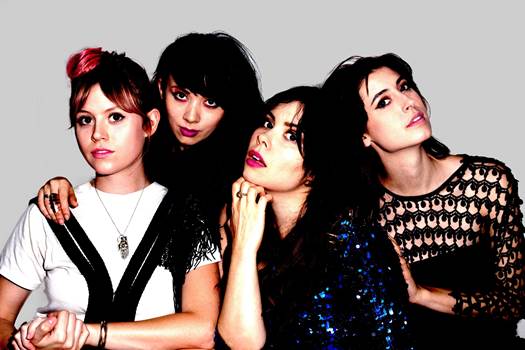 Austin four-piece Feathers released their debut single ‘Land of the Innocent’ last month and will release their debut album ‘If All Now Here’ on 27th May, with new single ‘Soft’ released the week before. They have also just announced UK tour dates for next month.

Feathers are an all-female line-up of vocalist Anastasia Dimou, bassist Courtney Voss and keyboardist Kathleen Carmichael. Lead singer, Dimou, has been described as having a bold live persona and brings a sense of mystery with her raw voice to a backdrop of pop melodies and beats, making the unique sound of Feathers.

New single ‘Soft’ is an energetic and dark synth pop track that features a strong electro chorus backed by Dimou’s husky vocals. The band’s debut album ‘If All Now Here, which was mixed by Steven DePalo (Cold Cave, Voxtrot), brings to mind Depeche Mode or Yazoo but with a modern edge. With lyrics that recall incantations, dream-walking and wrestling with desire, Feathers sound is the joining of isolation and pure emotion.

Feathers performed a host of shows at last month’s SXSW festival in the bands hometown of Austin, Texas including a prestigious support slot with Depeche Mode. These shows followed performances with likes of Robyn, Washed Out and The Duke Spirit along with performing at last year’s All Tomorrow’s Parties. Feathers have just announced they will be coming to the UK for shows in May and full dates are below;