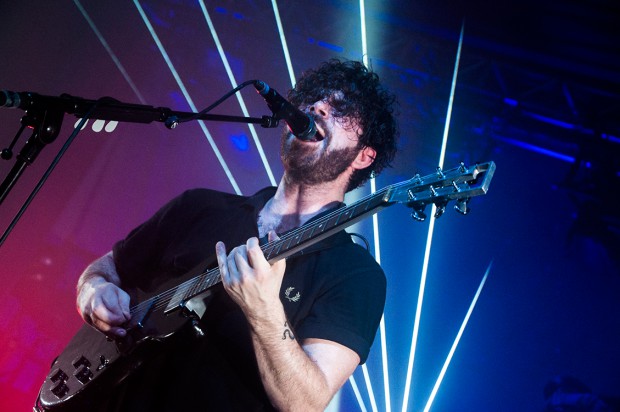 After headlining Norfolk’s Latitude Festival last year; which aided the three day event at winning ‘Best Festival Line-Up’, Oxfords’ FOALS returned to live action for a full scale attack on UK venues. Taking on tour with them maths-rock instrumentalists That Fucking Tank as the opening act, plus Kentucky rockers Cage the Elephant – the Birmingham O2 Academy was packed full of excited fans.

The Leeds duo of Andy Abbott and James Islip walked out onto the stage. No microphone set up, no noise in the background; then a female, robotic voice came over the speakers “Hello”, before the duo smashed into their half-hour long 5 song set. The coordination between the two members was unique; for opener ‘Acid Jam’, the audience appeared confused by the bands set-up; no singing, just pure scuzzy rock. After the first few songs however, the crowd settled and began to engage, but before too long, the voice came over the speakers “Thank you, we are That Fucking Tank” and silently, the pair walked off with dazed audience.

Huge cheers greeted Cage the Elephant, who had released their third album in the UK the previous day. As singer Matthew Shultz and the group walked on stage, it seemed only a matter of seconds before the energetic front man was within the heart of the crowd. Drawing heavily from new material, including recent single ‘Come A Little Closer’ which the crowd acknowledged by cheering, the best responses were saved for debut album classics ‘Ain’t No Rest For The Wicked’ and ‘In One Ear’. For set closer second albums ‘Sabertooth Tiger’, it saw the singer again enter the crowd, this time being raised above whilst fans supported his feet. For a support act, they were sensational; and with a performance as entertaining as this, they will surely be playing similar sized venues once the new album has settled.

Last summers festival anthem ‘My Number’ brought the biggest cheer of the evening whilst the mesmerising laser show during ‘Late Night’ brought out a whole new side to the track. The groups short set was explained by extended intros or outtros, normally getting dull for fans – however Foals maintained the momentum and at no point let the energy inside the venue slip.

As the group walked off stage, the usual “Encoreee” shouts were not present; instead, they were replaced with the riff for Foals notorious set-closer Antidotes track ‘Two Steps Twice’. Live, the track is transformed into a mayhem creating masterpiece – as Yannis, guitar in hand, wanders around the venue to find a nice place to climb on. In Birmingham, it was the balcony, appearing after a short break, music still being played, on the ledge above the adorning fans – ready to jump. As he counted down and reached one, the spoil-sport security pulled him back – much to the annoyance of the singer. He returned to the stage exclaiming “Lets fuck this place up Birmingham! ” which evoke wild pits and even a stage invader for the closing moments of the night.

Playing in the Birmingham Academy almost felt intimate for the group – who last year performed twice in a day to a sold out Royal Albert Hall. With That Fucking Tank and Cage the Elephant in tow, this wasn’t all about Foals – this was an evening of the best talents doing what they do best. Creating mayhem.