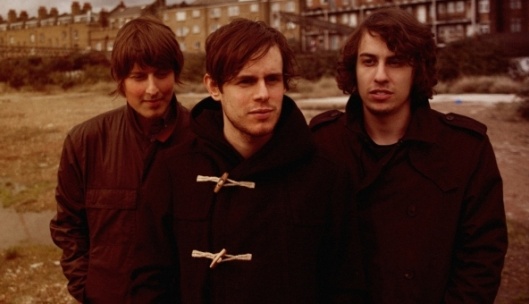 Piled onto a tiny couch in a cramped room above the catacombs of Edinburgh’s Cabaret Voltaire, Little Comets take a moment to relax and eat pizza, just a couple hours before launching into the third performance of their current tour. The Tyne-and-Wear trio consisting of bassist Matt Hall, and brothers Rob and Mickey Coles, are preparing to release their upcoming The Gentle EP, which to them, is just that.

“I think we settled on the name, The Gentle EP, because that’s what it is compared to a lot of our music previously. Especially the lead track –it isn’t that kind of bombastic and in your face. The three tracks that go with it are far more considerate, I think, than a lot of the things we’d normally release,” explains Rob. “I didn’t realise at the time because we tend to just write songs and then put them together without thinking why –they  just seem to work together well. But, it’s the first time, that four songs lyrically have been in the first person and they’ve been my take on an issue. Sometimes I write as if I was an object in a room and deal with an issue in terms of a story between two people or what in that way, and I don’t feel like I can bear my soul or my opinions on things. So this is the first time that four songs on the same EP, or album or whatever, have done that.”

As far as favourite songs on the EP go, all three members of the band have different opinions. While Mickey favours ‘The Blur, The Line, and The Thickest of Onions,’ Rob’s favourite is the opening track. “I like “Little Italy” because I enjoyed writing the lyrics for that one the most. It just came really quickly. I like writing lyrics where I’ve got a lot of space in a line so I can afford to veer off a little bit, whereas the other three were a bit, ‘Gotta be concise’. I find that really… it’s nice when it’s finished but I don’t enjoy the process as much.”

Matt takes his time to consider which song he enjoys the most, but finally settles; “This morning I made the video for the, ‘Early Retirement’ just so the song can go on YouTube, and I think that became my favourite this morning. I think I probably just realised what I thought it was about more than what I wanted it to be about. And I thought that was… I liked what I thought it was about.”

If a song can mean different things to different people, do they ever worry that people won’t understand the true meaning behind their lyrics? At this question both Matt and Rob look at Mickey.

“I do –I just think I’m very scientific so like, the idea of it not being clarified is just… I just find it annoying.”

Rob holds the opposite view of his brother, “I love listening to music on my terms, and for years I miss out lyrics in songs and then I find out what they were but I still go with my interpretation of it. I just like to kind of read something and it is ambiguous so you can put your own –I think that’s what everybody does, everybody reads something and they take what they need in their lives from it. So I don’t mind that as much. It’s like the lyrics are my take on it, so if somebody reads them and doesn’t get anything from it then I suppose it’s a shame, but I’m not bothered by it.”

With 2 studio albums under their belt, they’re persistent in writing music that is honest and that they can connect with. “Ultimately if we release an album and no one buys it, we’d still write songs and still put them on the internet for people that buy or listen to them,” declares Rob. “So therefore, we can do what we like, and talk about what we like in songs, and be honest with what we think about things because there isn’t the agenda of ‘oh, we need to do this so that person will like it and it will get played on the radio and we’ll sell loads of albums.”

The two brothers disagree once more when asked whether they prefer performing live or recording in a studio. Rob admits, “I like both because they’re so different. They’re almost –  it’s almost surprising that more bands aren’t just live bands and just put out live albums and bands that just do studio albums and do only a couple of gigs a year, but everybody seems to have folded in the middle and do both.”

Scientifically-minded Mickey, of course, prefers the opposite with attention to the atmosphere of the venue. “I pretty prefer recording, only because I find that live can be quite difficult in terms of like, technically today there’s a hole in the stage and that really pisses me off.”

Broken stages aren’t the only difficult part of touring though, Matt explains. “I think there are a few things that are quite hard about being on tour. You obviously miss home; these two have got families now so that’s always tough when they’re missing their families. As much as we all love each other deep down, we do pretty much spend 24 hours a day for 3 weeks with each other in the confines of a van or a dressing room. So, you do want to punch Mickey in the face sometimes but it’s all like it’s there for 5 minutes and then it’s gone because of that brotherly love, so that was cheesy and corny.”

Despite the difficulties of touring and playing live, Little Comets are a trio that have come far and continue to turn out a unique sound while staying true to themselves. While they continue their tour across the UK, The Gentle EP will release officially on 23 February. You can read our review of it here.