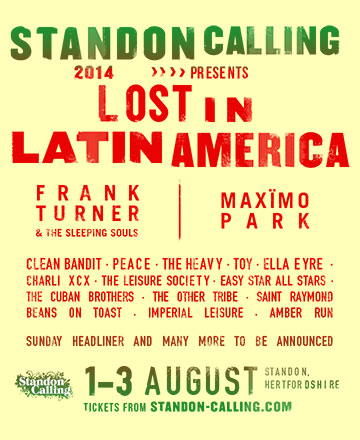 Standon Calling, the intimate  three day festival in Hertfordshire, has today announced some of the many acts due to take to the stage from the 1st August- 3rd August. FRANK TURNER 7 THE SLEEPING SOULS are set to headline Friday night, with MAXIMO PARK being confirmed as Saturday’s Headline act. Sunday’s act is due to be announced shortly.

The pair will join others including Clean Bandit, Peace, and TOY, with many more still to be announced.

This year’s theme is ‘Lost in Latin America’, and looks set to really heat things up in the little village of Standon; from flamenco dancing, a voodoo workshop to riding a llama through the festival grounds. Following on from last year’s successful outing, which saw the likes of De La Soul, Digitalism, Band of Skulls, Bastille, AlunaGeorge and London Grammar topping the bill, the festival will be looking to capitalise on it’s growing reputation.

For more information and to buy tickets visit the festival’s official website.