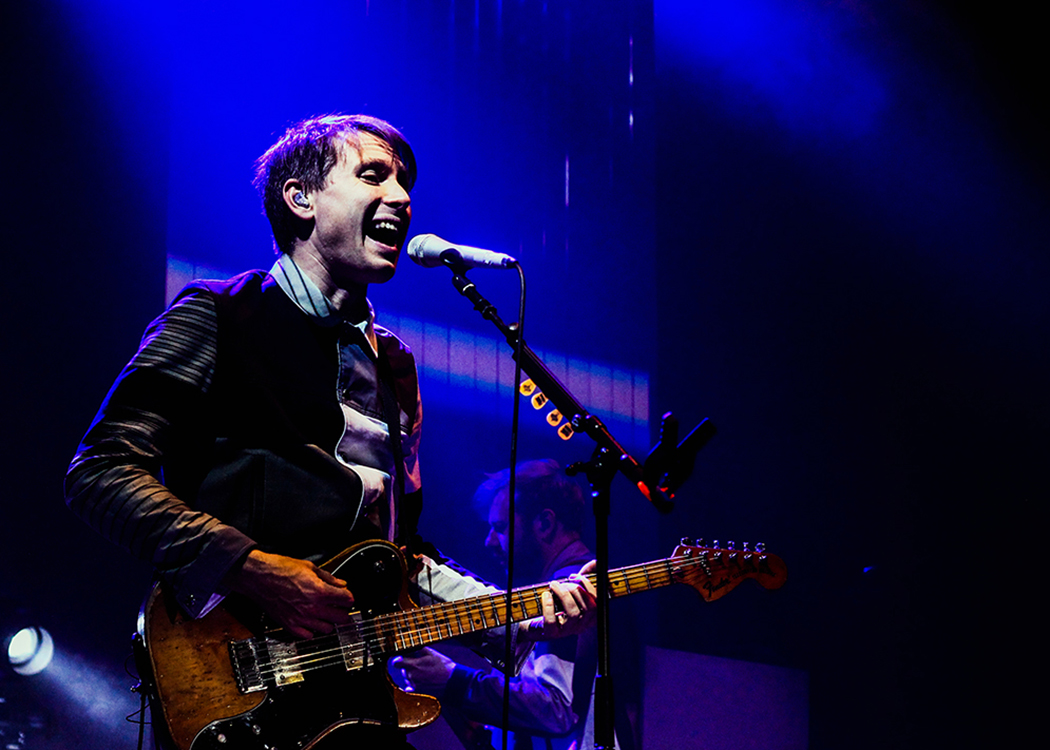 Franz Ferdinand have had an odd career so far. Releasing one of the albums of the decade back in 2004, their next two efforts never seemed to match their initial success. A self-imposed hiatus after 2009’s Tonight meant they faded pretty quickly from the public eye. Then suddenly, last year they hit back with 3 singles and a brilliant album. They seem like a reinvigorated band, celebrating where they’ve come from and; hopefully, the great things to come.

Shuffling on stage, Eagulls didn’t look like a band, they looked like the kind of guys you might find at the front of your math’s class. The bass player even bears an uncanny to Howard from Fresh Meat. No one seems to be paying them much attention as they set up. Then suddenly, a scream of feedback and a driving, moody wall of noise has filled the room. Despite barely moving for the whole set, with lead singer George Mitchell seemingly anchored to his mic stand, in some of sort of trance like state, they had a strange stage presence that filled the space and seemed to have the crowd onside. Blasting through 30 mins of tracks from their new self-titled album, Eagulls were a good choice of support, for this loud, but quite low key affair was the perfect build up for the main set of the night.

The curtain drawn back revealed a set full of different steps with some projections of random shapes floating around, evoking the weird symbolism in their recent video for ‘Love Illumination’. The band arrive on time, kicking straight into the punky ‘Bullet’, off last year’s Right Thoughts, Right Words Right Action. What follows is a good mixture of tracks from the first three albums and from the new release. The four years away seem to have done them good, throwing out every trick in the book from; call and response with the audience, the whole band around the drum kit, and many more.Yet Franz Ferdinand do it in such an effortlessly cool way that they avoid any cliché.

An early highlight comes in the form of the indie dance floor classic ‘Do You Want To’, the build-up of which they milk for everything its worth, whipping the crowd up into a frenzy. Mid way through the set, there comes an extend jam of ‘Can’t Stop Feeling’, underpinned by the bass line from Donna Summer’s ‘I Feel Love’, adding a more chilled out vibe to the song. The highpoint came, it seems, at the opening bars of ‘Take Me Out’, probably their most famous song. The moment the riff began, the whole middle of the Guildhall had become an empty circle, everyone jostling, awaiting the chorus. When it came, the crowd erupted, everyone charged, and for the whole rest of the song, the entire audience seemed to become one moving mass.

Lead singer Alex Kapranos was on fine form, climbing on and leaping off everything he could, constantly on the move. The rest of the band were tight as well, with guitarist Nick McCarthy taking lead vocals on ‘Tell Her Tonight’, and drummer Paul Thompson contributing to some great three-part-harmony’s throughout the set. As a nod to their past, ‘Stand On The Horizon’ was dedicated to “everyone who couldn’t see us at The Joiners [Southampton’s 200 capacity venue]”, where they played 10 years ago.

After finishing the main set, and coming back on to the obligatory chants of “ONE MORE SONG, ONE MORE SONG”, they hit through another three, clearly chose for maximum impact, ending with an extended version of ‘This Fire’ and new album closer ‘Goodbye Lovers and Friends’, a song which fittingly finishes with the line “but this really is the end…”.

Overall, and excellent and energetic set, with the band on very good form, knowing exactly what to do to whip the crowd up into a frenzy. They also successfully found the line between pleasing fans with old favourites and playing the new stuff, and I look forward to seeing them live again, hopefully as soon as possible.