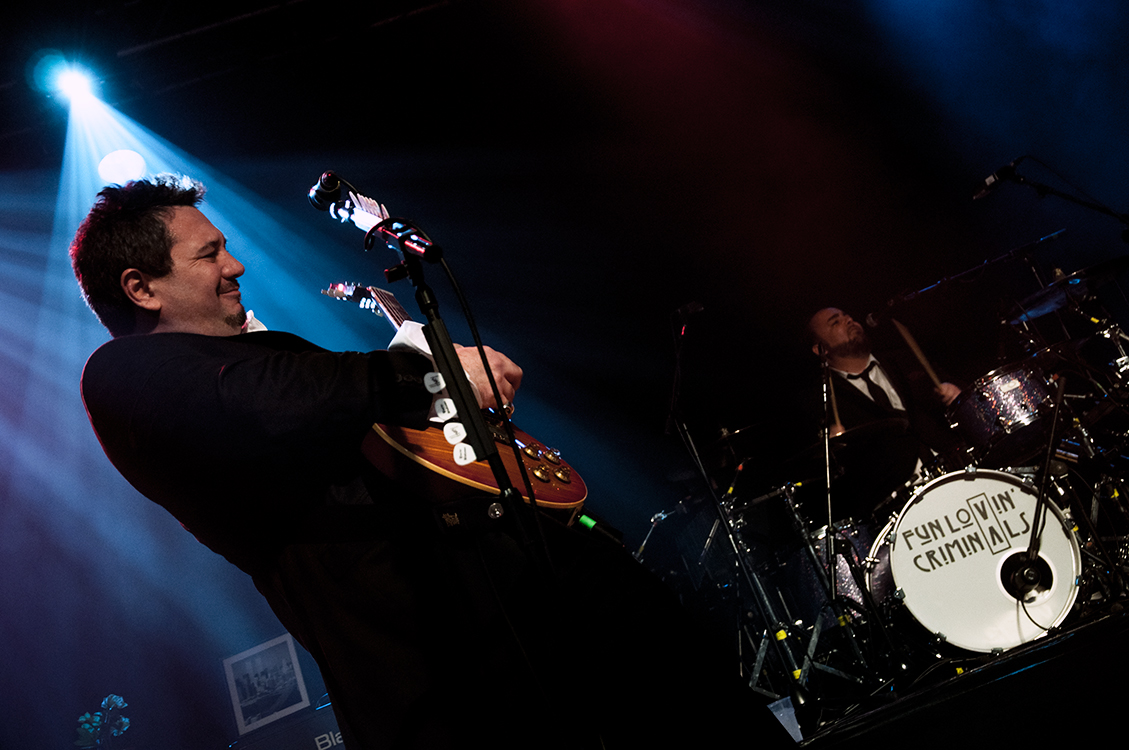 FUN LOVIN’ CRIMINALS returned to the live arena nearly 3 years since they last played live. The testament to their legacy was proven by the handful of dates across the UK, Ireland and Europe being completely sold out. Starting a few minutes later than the 9pm billed stage time, the lights dimmed and Huey Morgan, Brian “Fast” Leiser and “Uncle” Frank Benbini took to the stage, suited and booted and launched straight into an energetic yet slick performance of ‘Bear Hug’ like they’ve never done before. It saw all three members at the front of the stage, mics in hand rapping. This certainly got the crowd into the party mood from the off.

Huey Morgan seemed in a rather playful mood throughout the entire evening, jesting with the crowd, laughing at and sparring with shoutouts from the audience, it was like the fire had been reignited in him. The setlist leaned quite heavily on tracks from the first two albums: Come Find Yourself and 100% Columbian. More of a nod to their aforementioned legacy and a gentle reminder of who the Criminals are. This was not a bad move as the Sunday night crowd were certainly in a party mood.

Fast is an accomplished all round musician and not only playing bass and keyboards throughout the entire set, the occasional trumpet solo and various percussion instruments were also played inbetween backing vocal duties. Uncle Frank was also bringing up his influences from his solo career by adding his fantastic and thunderous drumming along with backing vocals and rap lines. The rested and re-energised FLC were on stunning all round form. It should also be noted that Huey Morgan is one of the world’s most underrated live guitarists. His solo’s and riffing during any performance are always underestimated. His ability to floor a room into silence by noodling away without a sweat is something to behold.

Highlights of the night included ‘King of New York’, ‘Loco’, ‘Where The Bums Go’, ’10th Street’, ‘Southside’, ‘Love Unlimited’ and the rarely played ‘I Can’t Get With That‘. The biggest cheers of the night were of course reserved for the likes of ‘Scooby Snacks’, ‘Big Night Out’ and ‘The Fun Lovin’ Criminal’.

Coming back after such an enormous break may have seen the band a little rusty in the live arena, however, the FLC proved this to be an incorrect assumption. With both Uncle Frank and Huey Morgan having had successful solo projects and keeping the momentum going, their passion and performance has never been so fine-tuned, tight and free-flowing. They have already stated that there will be summer festival appearances so this could hopefully pave the way for another set of live dates later in the year. Whatever you do, if you’ve never seen these criminals in the live arena, don’t rob yourself of the next opportunity.