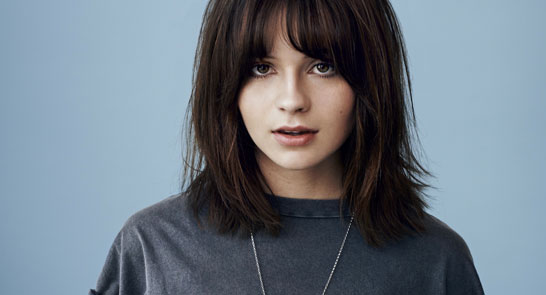 It may only be the start of November, however it’s starting to feel a lot like Christmas. On a cold evening in Liverpool, late night shoppers are finishing off their final purchases at the ONE centre and just a stones through away, one of the voices of the now seasonal Christmas John Lewis adverts is about to come on stage at the O2 Academy venue.

Greeted by a huge cheer, Gabrielle Aplin bounced across the stage to join her already playing four band-mates for set opening ‘Keep on Walking’. The upbeat album track paved the way for the early part of the set, with Top 20 single ‘Panic Chord’ receiving the huge cheer during the opening bars. The Bath singer spoke to the crowd often, with this being her first visit to the Merseyside city; she spoke about how sorry she was for not appearing sooner.

Even though her Frankie Goes To Hollywood cover is known for being slow tempo, the set didn’t appear to halt in any way. Instead, the crowd stood pin-drop silent; captivated, each embracing their other half  during the note-perfect, powerful rendition. Gabrielle went on to play a selection of slowed down album tracks alongside more rarer tracks, with ‘Rings Round Roses’ appearing to come off as the crowd favourite. Their was also an airing of the brand new ‘Pouring Out’ which was written during the tour with fellow band mates; the track had a notable more stripped back sound, performed on only an acoustic guitar.

Before Gabrielle and band departed the stage at the end of the set-proper, there was time for her major UK hit, ‘Please Don’t Say You Love Me’ and her newly announced single from debut album English Rose called ‘Salvation’. There was also time to play a highly unexpected ‘Wrecking Ball’, giving the Liverpool crowd a chance to sing along to the cover by Miley Cyrus.

Whilst tonight proved Gabrielle Aplin has more outstanding music than her breakthrough John Lewis advert success; upon leaving the venue to head back, the air felt slightly more festive and a little bit more like Christmas.