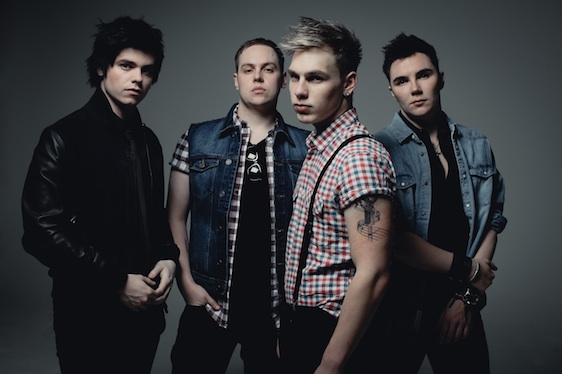 Currently embarking on a huge UK tour alongside boy-band super-group McBusted; Black Countrys’ EofE took time out of meeting fans for photos to talk to us about their time on the road.

SC: You are a few days into this huge tour with McBusted; how are the dates going so far?
EofE: Really well – it’s really great

SC: How did the role of being support act come about?
EofE: Well when the tour was announced; our manager sent off our tracks to McBusted for us to support. We didn’t hear anything back from them for a while, then out of the blue they just offered it – they told us one day “You’ve been offered the support for McBusted”. I don’t honestly know how it came about but we’re really glad it did!

SC: Have you been able to spend much time with them; what have you learnt and what will you take away from this tour?
EofE:  We had a good talk with James in Bournemouth; he said when he was younger he wanted to differ themselves for pop and have a more rock influence; he wanted the fans of the pop scene but have a rock element to it… It gave us some good-advice from that front. They are really nice; when we see them in the hall they speak to us and so long as we don’t hassle them or do anything ridiculous they’re great.

SC: You’ve not done anything stupid or ‘fan-boyed’ out yet?
EofE: Nooo! We’ve got to remember that they are famous people but they’re just generally cool guys.

SC: Whats the reception been like on the tour; knowing they’re not there to see you, hows it gone down?
EofE: They absolutely hate us; throwing stuff at us… haha! Nahh, completely reverse actually, it has been the opposite. The crowds have been fantastic and facebook and our twitter are just going mad. It’s gone so brilliant; I don’t think it could’ve gone better.

SC: What been your highlight of the tour so far?
EofE: Last night was special [first date at LG Arena in Birmingham]; plus Newcastle was really good because it was [Drummer, Nicky Waters] home-town. That one for me was so good but for the rest of the band it was last night; for the same reason. Bournemouth was really good too because it was all standing.

SC: EofE is quite an unusual name; how did it come about?
EofE: The name comes from a James Dean film East of Eden. Using East of Eden we were just invisible online. So when you typed in East of Eden we were about page 25… The fans kept chanting EofE as it was our logo; so we kind of thought it works a lot better – if you type EofE or EofEOfficial [their twitter handle] and straight up.

SC: You seem to have a diverse taste in music; from Maroon 5 to Deaftones, does that cause any problems when you’re trying to pen new tracks?
EofE: No, I don’t think so! I think we all like the same sort of bands – we have similar influences. If one of us was a pure metal head then that would through up some issues – It’s all heavier of the same thing at the end of the day. You have to be aware of what’s going on; sort of what songs are in the charts. Rock music is starting to come back but its about staying relevant.

SC: On 26 May you’ve got your single ‘Lust’ coming out. What’s the track about?
EofE: Basically, I had these lyrics and it’s about – really – just wanting to have a girl for sex and exploiting that… That makes me sound good. I had these lyrics in my head and I put some chords to it; that sounded good and we brought that forward. Dan expanding on the riff and the we put bass on and at each practise we seemed to add more stuff and now it’s going really well!

SC: What are your plans over the next 12 months?
EofE: We’ll be playing it by ear really; tours hopefully. We’ve had a few offers from Germany and America but we’ll see what happens. I’d like to go to Europe and I think we’d like to build up more steam before we head to America. We’ll be back in the studio – but we’ve got no real demand for an album yet but if the demand is there then we’ll obviously talk about it.