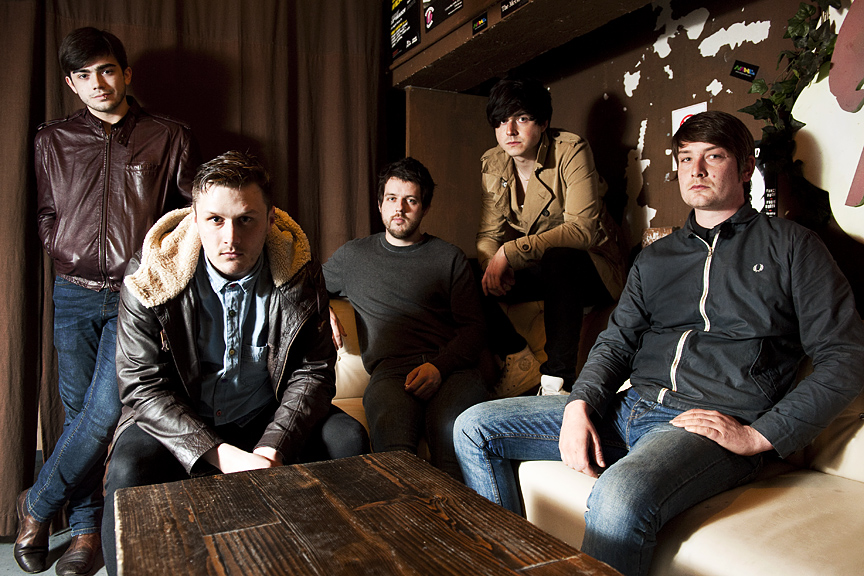 It’s cold. It’s wet. It’s noisy. We’re standing outside the Victoria pub in Birmingham, where in just a few hours’ time East London five-piece Dexters will be playing the fourth show on their biggest headline tour to date. Having released their debut album, Shimmer Gold, just a few days earlier, for many fans this will be their first chance to hear the new material live.

In between sheltering from the wind and rain, we sat down to chat to vocalist Tom Rowlett and guitarist/backing vocalist Chris Heggie about life on the road, their favourite tour memories, and what we can expect from the band in 2014.

SC: How’s the tour been going so far?

Tom (Rowlett): It’s been good. Really good. Started off really well in Southampton, then Brighton, Bristol. It’s all been really good. We’re meeting some nice people. The album’s getting a good reaction, we’re signing some at the gigs. It’s good.

SC: Are you enjoying playing the new material live?

Chris (Heggie): Yeah, we’ve even got some songs for maybe the next album coming in. We’re constantly throwing things in and chucking other things out. Keeping it fresh.

SC: So do you tend to write a lot of your music on tour?

Tom: I can’t do it. I come up with ideas for stuff, but our tour bus isn’t that good. Our TM’s amazing, but it isn’t built for that. Someone always wants to be sleeping in the back.

Chris: It hasn’t got a studio inside.

Tom: Yeah yeah, you’d be bashing someone’s head with a guitar. I do enough writing when we’re not on tour that I can just enjoy the tour for what it is. There’s no ‘Oh crap, we need to write some songs’. We’ve got shit-loads.

Chris: Loud. Really loud. That mainly comes from Tom, to be fair.

Chris: If there’s not a movie on…

Tom: Yeah, I get antsy. I get a bit, like, ‘I’m bored, I’m bored. Does anyone want to play a game?’ I’ve got a short attention span, so I try and get people to play ‘20 questions’ and shit like that.

Chris: I’d say, on the way to the gig it’s reasonably calm. After everyone’s had a couple of drinks, on the way back from the gig, it’s very difficult for the driver. It’s a good atmosphere on the bus.

SC: So are you guys crashing in hotels? Sleeping on floors?

Tom: Yeah, [the hotels] are all miles away from the venues, that’s the only problem.

Tom: Last night was great. A mate of mine owns a hotel in Bath, so instead of staying in Bristol we travelled up the road to Bath.

Chris: It was like a mansion though. It wasn’t like a hotel. A spooky mansion with beds from Game of Thrones or something. Proper kings and queens beds. Well weird.

Tom. There was a cupboard, and everything opened up into one of those bars. It was like, ‘oh, this is nice’. But then tonight, it’s back in the bloody Travel Lodge.

SC: Are you playing with the same bands throughout the tour or picking up local supports as you go?

Chris: There’s a lot of local bands. There’s a couple of shows that we have Decoy Jet.

Tom: We’ve got Arthur Gun in support for London. They’re really good. Last night we played with Towns. I got a T-Shirt off them.

SC: And I guess you’ve also played support for a lot of other bands. Who would you say was your favourite, or one you really remember?

Tom: There’s been loads of good ones.

SC: Do you think when you play with other bands that your performance style adapts to the band you’re supporting?

Chris: I don’t think it changes. I don’t think what we do changes. I’d say maybe in the evening when we’ve all had a beer and go out with them, that’s when we follow in their footsteps, because obviously we’re quite fresh to it, and most bands will show us where the right club is to go.

Tom: Every band knows the pub that’s near the venue but not so near that everyone goes in there before the gig. Get a game of pool, something like that.

SC: Have you got any rock’n’roll stories about any of the night out you’ve had with other bands?

Tom: I got kicked off the Courteeners’ tour bus once. That was quite funny. We went out to some pub in Glasgow, and it just got really, really messy. The next thing I remember was their TM saying ‘get off the bus!’ I realized where I was and was just like ‘where are you going? We’re going to the same venue. Can’t we just come with you?’ He said ‘no’ and kicked us off. You [Chris] were upstairs chatting, and we got kicked off, and had to walk around for two hours.

Chris: It was three hours, and every cabbie that drove past wouldn’t stop for us. We must have looked too drunk. None of them would stop, so we were walking around for three hours trying to find our hotel in Glasgow. It was horrendous. We were not acceptable for the cabbies.

SC: So you say you watch a lot of movies on your tour bus. What are you watching?

Tom: It’s not the kind of atmosphere where you can sit down and watch a thinker. Someone’s always chatting to someone else. We watched Hot Rod. We were watching Chopper today. That’s not a comedy.

Chris: I haven’t seen that before, and that was horrendous.

Tom: It’s a true story starring Eric Banna as this nutter who chops off his own ears.

SC: Do you like hanging out a lot on the bus, or do you like to get time away while you’re touring?

Chris: You’re always around each other, but I think we get on really well. There’s never any bust-ups; no matter how plastered we get, we never fall out. There’s scuffles here and there, but…

Tom: We just give them a slap and move on with the day.

SC: What are you looking forward to in 2014? I know your album recently came out….

Chris: That was the thing I was looking forward to!

Tom: If we can sell a T-shirt to every one in five…

Chris: We can buy some beer.

Tom: We’re looking forward to that. Some festivals are going to be announced soon.

Chris: Going over to Germany. Germany’s going to be alright.

Tom: We’ve got a single in the top ten indie/rock’n’roll chart. Above Beck!

SC: Have you deliberately targeted Europe, or is that something that’s just happened naturally?

Chris: We want to go around there as well. It’s just experience. Craziness. It’ll be nice to chill in Germany. I’ve never actually been to Germany.

SC: Have you played any foreign shows yet?

Chris: No, no. Well apart from Scotland, but that’s not really foreign.

Tom: No we haven’t so that’s our first trip out. They’re booking more shows in Europe as well, so it’s pretty busy this year. Got my passport sorted out. Renewed it. Ready to go.

SC: You mentioned festivals. Have you been confirmed for some already?

Chris: We’ve got a couple floating around.

Tom: There’s some we can’t announce yet. Maybe we’ll give you the exclusive next time! We’re playing Strawberry Fields festival.

Chris: We’re playing one in Germany as well.

SC: So where did the name Dexters come from?

Tom: There was a bouncer at this club in London, he chucked me out of the club for something or other.  I said, ‘come on mate. I’ve got to get back in’. I thought I was wearing him down a bit. I was like, ‘look, if you let me in, I’ll name my band after you’. And I kept my promise.

Chris: Have you heard where Dexter is?

Tom: I don’t know where he went. I think he got sacked not long after that!

Chris: For letting people back in when he shouldn’t!

SC: What are you most proud of that you’ve achieved so far?

Tom: The album. I love it. I’m immensely proud of it.

Chris: Pulling in a brass section and string section to come be on the album. We were on a budget to get what we had.

Tom: We just called in favours, got a brass section down and didn’t take no for an answer. We could have just gone, ‘ah well, there’s no money for it’, but it was our debut album, and you only get to make one. Smashed it. Really proud of it.

Dexters’ tour across the UK continues: