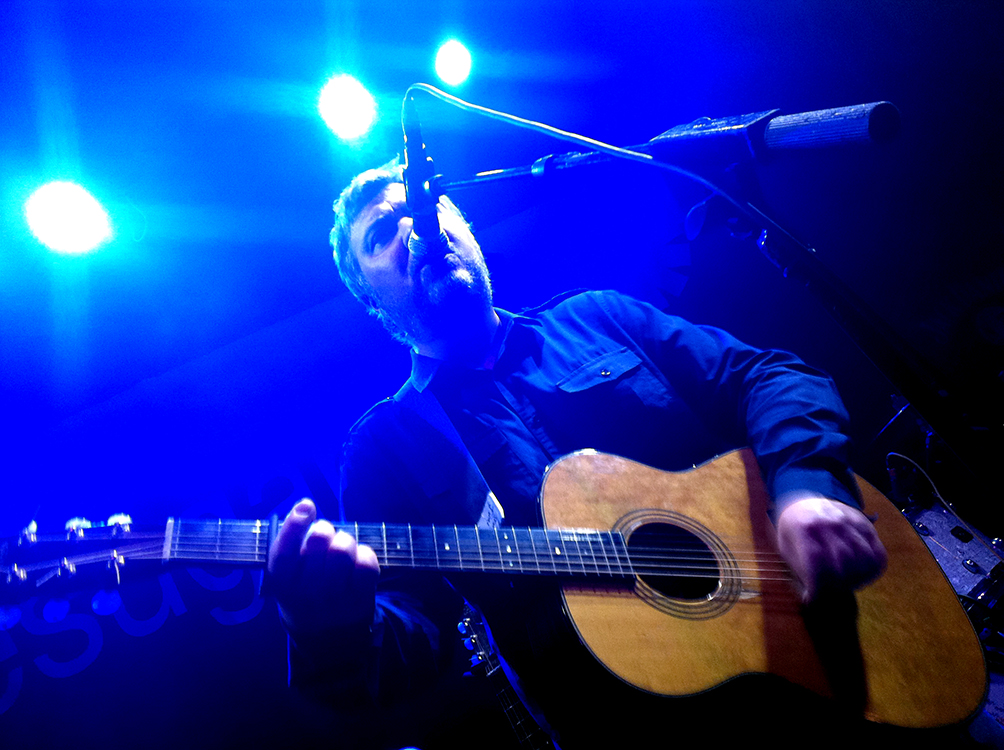 JIMI GOODWIN took to the stage of the intimate Sugarmill in Stoke ahead of a support slot on Elbow’s UK Tour kicking off tonight. The songsmith sauntered on stage with his band and immediately addressed the crowd asking “How are you Stoke?”, amongst the cheers, a voice asked him the same question back. Jimi responded with a scrunched up face and a shake of the hand, indicating that he wasn’t sure, and feeling a little nervous.

He needn’t have worried at all. Album opener Terracotta Warrior opened the show and immediately kicked off over an hour’s worth of high quality craftsmanship. The thumping basslines from Jimi’s left handed axe thundered out across the intimate room along with his superb vocals. The audience appreciated the fact that tonight would be wholly solo material and really embraced the album being played. Following the stonking opener, Didsbury Girl followed and kept the momentum going.

Despite the early admission of nerves, Goodwin put on an effortless performance. Once he is behind his bass, he seems to dip in to his onstage persona. Thrusting a confident, soulful manner across to anyone within reach. First single Oh! Whiskey saw the first of a few flirtations with acoustic guitar duties for Jimi. Ghost of The Empties and Panic Tree being equally as precious and tender for the audience to listen to.

More upbeat numbers did grace the set and saw the room begin to move in various episodes of disjointed dancing. Like A River, Lonely At The Drop and in particular, the funk/dance of Man v Dingo saw a lot of cheering, joining in with Jimi on vocals and dancing, arm waving and pointy arms in the air.

Jimi seemed to warm in to his role of solo frontman fairly easy. He found time to be called to the front of the stage by a fan and posed for a “selfie” whilst pulling a face. He also dived in to his personal archives by remembering a Doves gig at the “long lost Wheatsheaf”, aka the first gig where Doves changed their name, changed the set around and launched themselves. He did admit to not remembering The Sugarmill despite having played a few times previously, Jimi seemed highly confused by his memory letting him down, but all is defintiely forgiven.

Throughout the set, Jimi treated us to a couple of Doves tunes. Snowden was first up and sounded as glorious as ever, especially with the addition of the entire audience singing along to the choral backing vocals. Lost Souls, the title track from Doves debut album also got a lovely airing along with a funky rendition of The Last Broadcast, the title track from their acclaimed second album.

The joyous spectacle that is Lonely at The Drop saw Jimi close the show. He applauded the crowd for joining in with him tonight and listening to his songs and promised to see us soon. With his UK tour supporting Elbow kicking off tonight rolling in to a tour of his own throughout May and various festival appearances, It is sure to be a busy one for Jimi Goodwin. Please, catch him where you can.