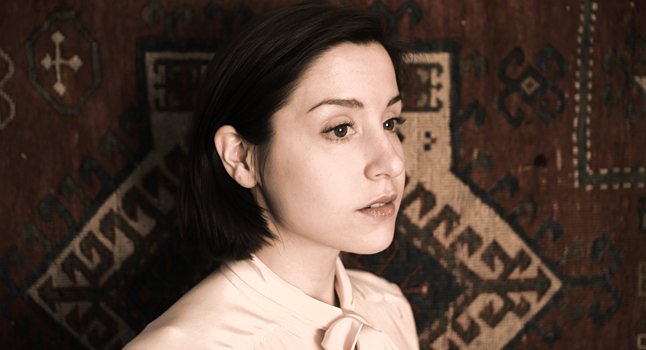 An ad-hoc stage area has been cleared in Derby’s Waterfall bar this evening, following a last-minute venue change for Laura Stevenson’s show. In front of it, a small but eager crowd has gathered, perching on stools, standing expectantly with drinks in hand. While her reputation in the US only continues to grow (including considerable online buzz following her recent SXSW performance), in the UK she’s known to only a few dedicated followers. Tonight those followers have converged on a mid-size Midlands town to hear one of America’s brightest songwriting talents.

First up are Norwich boys DUCKING PUNCHES. Only two members of the five-piece are present, giving a stripped-down performance of songs from their upcoming album Dance Before You Sleep. Vocalist/guitarist Dan Allen and violinist Sergio Tauroza put on an impressive display, their folk-punk stylings evocative of Frank Turner’s impassioned, energetic style. With their foot-stomping rendition of ‘Big Brown Pills From Lynn’ and a rousing version of album opener ‘It’s Been A Bad Few Weeks’, they make quite an impression on tonight’s crowd. The full band performance should be something to behold.

As LAURA STEVENSON takes unassumingly to the stage, perching on a bar stool reserved for the occasion, the crowd greets her warmly. Performing a solo acoustic set (Stevenson usually performs and records with a full band), there’s a sense of nervousness as she settles into the set. Opening with ‘Journey to the Centre of the Earth’ (taken from her most recent album, The Wheel), her voice, however, is as flawless as anyone here could hope for. Following it with ‘The Healthy One’, she possesses the kind of pure, delicate emotion that makes it easy to forget you’re standing in a pool bar opposite a train station.

Much of Stevenson’s writing stems from her American, specifically Long Island roots, something that comes across in the US folksy twist that many of the songs tonight possess. Alongside the likes of ‘Montauk Monster’, there’s even a delicate rendition of Townes Van Zandt’s ‘If I Needed You’, a country standard which, in her hands, gains an ever more fragile beauty.

It’s Stevenson’s own compositions, however, that hold tonight’s audience in rapt silence. Between songs, she makes light of the fact that her set list choices tonight are, in her own words, ‘sad’. ‘Nervous Rex’ and ‘A Shine To It’ are as heart-wrenching as on record, and even the upbeat, rockier ‘Runner’ gains a melancholic edge. ‘Bells and Whistles’ and ‘The Hole’, with their abstract lyricism, are delivered to heartstring-tugging perfection.

Between songs she is funny, endearing and slightly awkward, but as a performer she is mesmerizing. It seems strange that it’s even possible to catch her at a show as intimate as this one, such is the arresting beauty of her voice and the pure pleasure of hearing her perform live. That matters little to the people gathered here tonight, but for anyone who’s not yet had a chance to experience it, it’s a luxury that might not exist for too much longer.