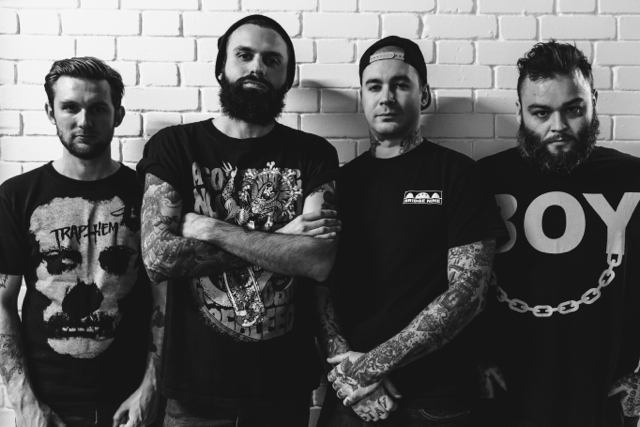 Watford punk outfit GALLOWS have made new track ‘Wristslitter’ available to stream. Taken from their upcoming 7″ release ‘Chains’, the song is every bit as acidic, aggressive and engaging as you might expect, from the juddering, scuzzed out power chords to vocalist Wade MacNeil’s angst-fuelled screams.

Guitarist Laurent Bernard believes the new material’s drive and energy is down to the buzz the four piece instantly felt when they got back into the studio. Speaking about ‘Chains’, the new single’s eponymous track, he was certainly happy with the way they came together to write and record.

[quote style=’1′ cite=”]”It started off with one riff and by the end of the day it was recorded. We did it all live too like we were making a garage punk record. My friend Helena who sings in a great band called Dios Mio happened to be in the studio that day so she came in and added some vocals and textures, which brought a very haunting element of the track. It’s very different but still very dark which is what Gallows is all about.”[/quote]

Following on from the single’s release on the 30th, the band will also be playing several UK shows this July. Full dates are as follows: