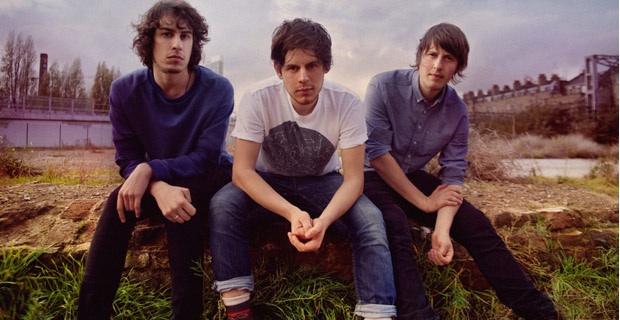 For die-hard fans of LITTLE COMETS, last night’s performance at Cabaret Voltaire in Edinburgh was an extraordinary experience. Before the trio took to the stage with their stand-in drummer (David “Greenie” Green) they could be spotted having a cup of coffee at the bar, or chatting in the corner by merchandise. The complete geniality of the Newcastle upon Tyne native group followed them on stage.

Nerves aside, lead vocalist Rob Coles stood in the purple light with his guitar tucked high up into his shoulder looking out into the overcrowded audience. This particular show was sold-out, and standing in the caves of the main room meant you knew your neighbours all too well by the end of the night. This wasn’t a problem though, because nearly everyone in the crowd was relaxed and friendly –a clear reflection of Little Comets musical energy.

After two opening acts, Model Aeroplanes and Catfish & The Bottlemen, the crowd was buzzing in anticipation, trying to cram themselves into the congested room. Both bands delivered an impressive heartfelt sound with high energy despite their young appearance. Once the second band finished their set, Little Comets appeared on stage seemingly out of nowhere, jumping straight into ‘A Little Opus’ a track from their 2012 sophomore album, Life If Elsewhere. Being shoulder to shoulder, the crowd was hesitant to move to the music at first, but the connection between Matt, Mickey, and Rob on stage was too strong to resist. These were clearly a group of guys who were meant to not only play music, but play music together. During several songs the boys broke away from their microphones to jam together, grinning from ear to ear and clearly enjoying themselves. Along with tracks from their previous albums, Little Comets played songs from their upcoming The Gentle EP, such as Rob’s favourite song from the EP, ‘Little Italy.’

Despite the cheerful stage-presence during songs, Rob’s speeches between them were difficult to hear because of his reserved nature and general shyness. While he has no problem singing in front of hundreds of strangers, on-stage small talk proved to be a considerable obstacle. This only proves that they’re music and performance is as honest and open as possible.

With twenty minutes left on the clock before their departure, the teenage boys in the back of the crowd finally got the song they had been begging for all night; ‘Joanna.’ Of all the songs that they played that night, this was particularly a crowd pleaser, and Rob’s voice faded into the background with the audience singing most of the song louder than him.

To wrap up the show they explained that an encore would be far too difficult and pointless, so they treated the crowd to one last tune, and of course it had to be ‘This One’s For Dancing.’ As expected, everyone danced. They were polite and apologetic for some of the less than desirable elements of the venue, and made an effort to reach out to fans after the show. It was definitely a gig worth seeing, for the rarely pure and honest performance.