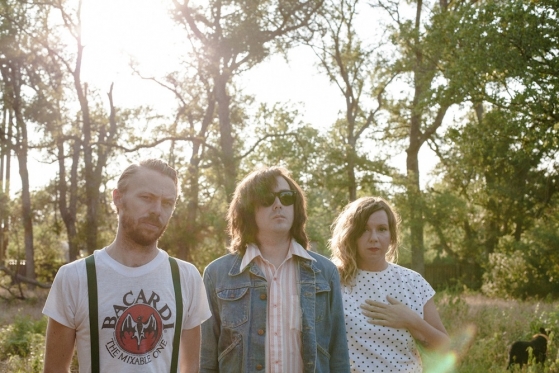 Love Inks have unveiled a super sweet new video to go alongside new single ‘Outta Sight’, after recently announcing news of their new album ‘Generation Club’, which is set for release on September 23rd through Monofonus Press.

‘Outta Sight’ shows what Love Inks do best; Sherry’s distinctive caramel vocals are placed against a backdrop of playful percussion and soothing synths, highlighting the beauty of simplicity, which can often be overlooked. The warming new video goes hand in hand, giving an insight into the personal lives of the Austin-based trio. It shows the group embark on an array of glorious summertime adventures complete with great friends and family, emphasizing the importance of those things that make life oh-so-sweet but, too, can often be overlooked.

“There’s a lot of loneliness and isolation… and time is mentioned a lot” explains Sherry. “Time passing slowly is a theme for some reason. Austin is a lazy town and time goes very slowly, we love it here but people don’t really hop to it so to speak. To get the record done Kevin didn’t talk to anyone for a long time and just focused on recording. Isolating himself really angered all of his friends, who thought he was being weird, which furthered the level of isolation… Overall it’s a positive album, but it is very reflective.”

With the record’s conception pointed at their first European tour & time spent in Berlin, it makes sense that ‘Generation Club’ was created with their live show in mind, this time with a focus on creating a slightly fuller sound.

“E.S.P. was so short and minimal, our live performances felt like we were reading poetry at a music venue.” she recounts. “This time we wanted to add some mid-frequency tones to help balance out the quiet on stage. The album is still minimal and sticks with what we do best. We’re always going to love drum machines more than live drums for this band, it just fits better.”

As with all of their recordings, Generation Club was then recorded on a half-inch tape machine, by the band in their hometown of Austin, but this time mixed in an analogue studio by Matt Oliver at Big Orange Studios, using methods inspired by Kraftwerk & Brian Eno.

“It’s a labor of love when someone does that,” Sherry muses. “It’s about their rhythm and timing and even muscle memory. It leaves very little room for error on the musicians part and adds very distinct fingerprints from the person mixing– there’s no auto tune or cutting and pasting within the tracks.”

Love Inks look forward to a US tour this fall, followed by a string of European dates at the end of 2013. Details to be announced shortly.