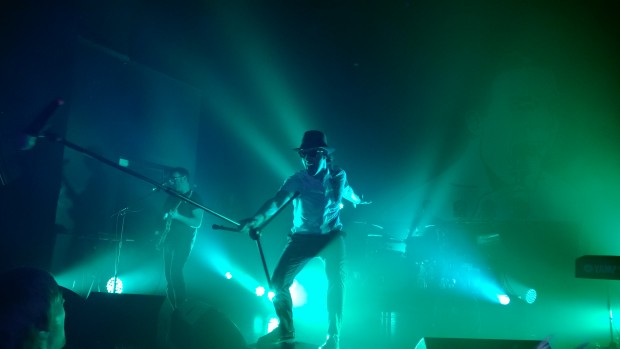 Maximo Park burst onto the scene in the indie hey-day of the late noughties with their Mercury-prize-nominated debut A Certain Trigger, and while subsequent albums sometimes failed to recapture that initial brilliance, recent fifth effort Too Much Information saw the band finally reconcile the unbridled enthusiasm and emotion of their early years with their ever-growing maturity as musicians and performers. The ultimate test, however, will be in the live arena, and with a packed-out Institute waiting to appraise them, the pressure is on.

Before that, it’s up to London four-piece TELEMAN to get the crowd warmed up. Comprising Hiro Amamiya, Peter Cattermoul and brothers Tom and Jonny Sanders, the band rose phoenix-like from the ashes of indie-rock outfit Pete and the Pirates, who disbanded (for unknown reasons) back in 2012. With their debut album not released until later this year, their set is new to many in the room, but their flawless execution and arresting sound means that they will leave many curious about their new material.

‘Skeleton Dance’ and closer ‘Steam Train Girl’ have more than a few toes tapping and heads nodding appreciatively along. Their incredibly tight musicianship is key to the light yet infectious rhythms of both, with vocalist and guitarist Thomas Sanders’ smooth, Pet Shop Boys-esque vocals adding a slightly ethereal quality to the whole affair. ‘Redhead Saturday’, with its beautiful opening guitar work and unusual tonal blend of melancholy and optimism, leaves a lasting impression. As the full band kick into action, it builds to a climactic finale that the audience are only too happy to cheer for.

It’s not an easy thing to play to someone else’s crowd, but Teleman do so admirably. They let their music do the talking, and when they have songs like their latest single ‘Christine’ to draw on, there’s not much more they could say. The crowd are loving it, and with a few more fans under their belts, the band can leave the stage with a job well done.

It’s Maximo Park, however, that most people are really here to see. The lights go down, and slow, electronic music starts to play through the PA systems. It seems like forever until the sound is suddenly cut, only to be replaced by a wall of screams and cheers that sweeps through the room like wildfire. As the band take up their positions on the stage, it is with the arrival of Paul Smith (surely one of the best front men in rock right now) that the night really gets going. Having been forced to cancel the first two dates of the tour due to his recent eye surgery, fans might have been concerned that he wouldn’t have managed his usual cavorting, riotous stage antics, but those fears were soon allayed. From the moment that opener ‘Give Get Take’s rumbling opening notes begin, he is a ball of energy, leaping around the stage with the enthusiasm of someone performing for the first time, not a member of a band who’ve been playing together for 14 years.

This showmanship is the reason that seeing the band live (as opposed to hearing them on record) propels them into a whole different ballpark. While their music possesses a certain amount of energy in the studio, on stage songs erupt into huge, anthemic indie numbers whose rich depth of sound and the passion with which they are performed make them feel like altogether stranger and more temperamental beasts. Much of the night’s set list is drawn from the band’s most recent album, including the likes of ‘My Bloody Mind’, a raunchy, rock’n’roll number in which Duncan Lloyd’s juddering guitar chords and contrastingly delicate refrains create huge dynamic changes that have the crowd alternately dancing and clapping in time. ‘I Recognise the Light’ is a disjointed, frantic mix of off-kilter beats and punctuating bursts of jagged chords, with Archis Tiku’s thundering bass lines giving proceedings a suitably smoky undercurrent. Smith has to give up his mic stand-wielding shenanigans for recent single ‘Brain Cells’, whose contrastingly muted performance gives it a somewhat surreal tone in comparison.

What many fans are here for, however, are the old classics, and they are delivered with such incredible gusto that even the band themselves seem surprised. ‘Apply Some Pressure’, ‘Girls Who Play Guitars’, ‘Signal and Sign’, ‘Graffiti’, the list is endless*, but each and every one is greeted with so much enthusiasm that even a Directioner trapped in a lift with Harry Styles would struggle to match it. A small mosh pit even breaks out for ‘Limassol’, and given that the average age of the people here tonight is some way over 18, it’s something to behold.

Tonight’s gyrating, pulsating performance is a real tribute to the work ethic and passion of each and every member of Maximo Park. From Lukas Wooller’s mesmerizing keyboard jumps and leaps, to Tom English’s never dropping a single beat, they have honed their performance to perfection; Smith’s rather flexible hips may have drawn much of the audience’s gaze, but it was their overall brilliance that made this such a night to remember.

The sincere gratitude of the band, who perhaps were not expecting a reaction quite as rapturous as the one they received, was a beautiful final note for an excellent performance. As they round off the evening with debut album favourite ‘Going Missing’, it’s hard to hear Smith’s vocals over the chorus singing every word back to him. As the band depart the stage, Chicago’s ‘If You Leave Me Now’ starts playing over the PA system, prompting half of the crowd to start slow dancing with friends and partners alike. It’s a beautiful, spontaneous moment, and it’s not hard to believe that the sentiments of this final, unexpected closing song are a pretty fair reflection of the crowd’s feelings about what has been a truly brilliant night. They may have gone, but they’ll surely be back, and most of the crowd here tonight with be joining them.

*Not really. But they played a twenty-two song set, which is still quite long.