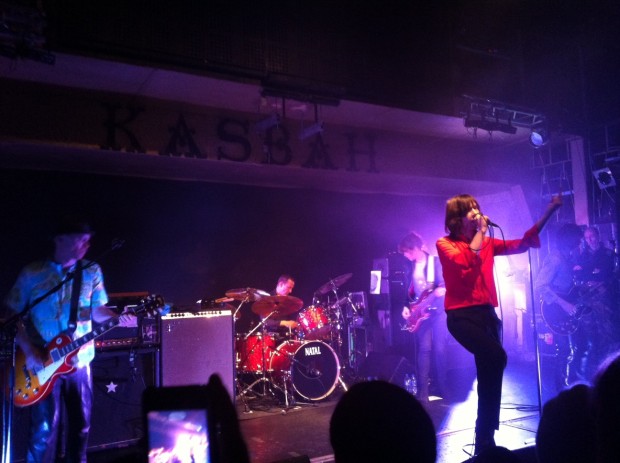 Primal Scream need absolutely no introduction really, that’s exactly what happened last night too. Security didn’t know what was happening when I asked if there was a support – in fact the one security guard claimed to have never even heard of Primal Scream…! Just after 8.45 the ‘Scream casually walked out on stage to a subdued round of applause which then grew and grew as soon as people realised it was show time.

Bobby Gillespie lead the band into what in their own status was a rather intimate warm up show for their Glastonbury slot today supporting the Rolling Stones. They kicked off with the elegant ‘Out of the Void’ from 1996’s Vanishing Point album. A slow burning entrance, but fit the pace exactly before blasting us with a shortened version of ‘2013’.

Bobby seemed in high spirits and interacted with the crowd throughout the set. ‘Burning Wheel’ sounded massive. Now this was my first time seeing them since Mani had left to rejoin the Stone Roses, and I did wonder whether his place could be filled equally. But I needed to fear not, Simone Butler did a stunning job. At times the bass was a little low in the mix, but by the time they get around to doing a full tour, she’ll be fully settled in. ‘Shoot Speed/Kill Light’ ended the opening section of the Scream’s better known tracks, before a run of newer material.

New single ‘River of Pain’ was incredible. The atmosphere built up from the crowd exploded and everyone seemed to get down with the band, this continued right through the debut of album track ‘Tenement Kid’ and ‘Turn Each Other Inside Out’. Recent single ‘It’s Alright, It’s OK’ got another of the evening’s loudest cheers and pretty much the whole room sang it with Bobby and co.

After an impressive rendition of ‘Hit Void’, the singles came back starting with the classic ‘Country Girl’ which again had the whole intimate Kasbah joining in. Bobby again seeming in playful mood encouraged us to get louder. The main set was brought to a close with a sprightly rendition of ‘Rocks’ which caused the biggest reaction of the night so far. The band left the stage after just 11 songs, and although they were playing a festival warm up, it felt like it was the right length.

Coming back on for an encore, the band pulled out a couple of rare tracks. First off was another live debut from the new album, ‘Walking With The Beast’. Echoing the main set opener it was played quite subdued and floated along perfectly, this lead into an old Primal track ‘I’m Losing More Than I’ll Ever Have’. It was nice to see just how many knew this track as I felt it was an obscure choice to play, albeit a nice surprise, and it seemed more than I imagined did know it.

‘Loaded’ brought the tempo back up. The old indie classic saw Bobby pick up marakkas and come down off stage to shake hands and hug people in the front rows as he left the band to bring the atmosphere up to speed. The whole room sang along and made it feel like the intimate setting was actually an arena. Flowing right through to the finale of ‘Come Together’ it felt more like you were at a religious convention. Bobby’s stage presence captivates you and draws you in, you feel individual in a mass crowd. It was uplifting and the band seem so content performing now. The touring of the ‘Screamdelica’ reissue has given them more life again.

Coming back on stage for a second encore, the band pull out ‘Movin’ On Up’ and is the perfect ending to the night. It takes on an electric yet gospel-like feel as band and crowd become one massive unit. I don’t think the Kasbah or the crowd were ready for a show of this magnitude, the foundations literally shaken to the core. The band bid us farewell and disappear off stage having successfully conquered Coventry.

It will be a contrast to see them playing on the Pyramid Stage at Glastonbury tonight infront of thousands of people having seen them in a room of around 1,000 last night. They will smash it no problem. But last night, Primal Scream were indestructible.