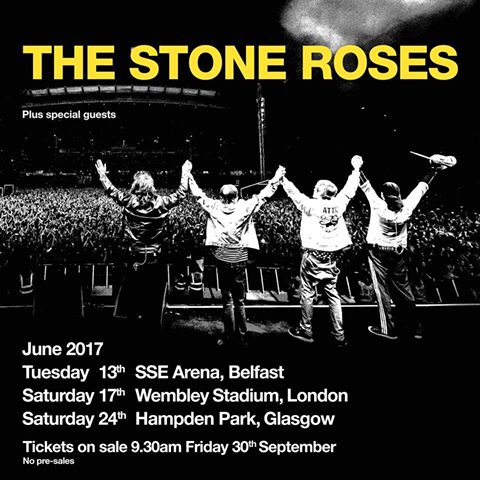 The Stone Roses are going to play three UK shows in June next year. They’ll play in Belfast, Manchester, and London. Tickets will go on sale on Friday 30 Septemeber at 9.30am.

Fortunately the band have kept up momentum announcing shows so soon after playing to over 240,000 people across four sold out nights at Manchester Etihad stadium, as well as a sold out show at New York’s Madison Square Garden and headlining this years’ T in The Park.

This summer also saw them release new material, including the huge singles ‘All For One’ and ‘Beautiful Thing’, a sprawling seven-minute epic with a loose, easy and baggy flow – running very much an early 90s spirit.

The band have kept very quiet about their progress behind the scenes with regards to a new album, but rumours suggest that the release of the very much anticipated third album is due.