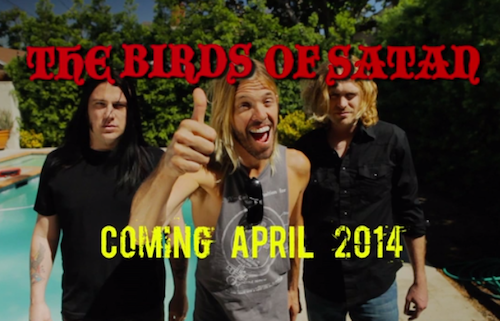 Foo Fighters’ drummer Taylor Hawkins has announced details of his new band THE BIRDS OF SATAN, whose self-titled debut album is set to be released on April 15th.

Also featuring Wiley Hodgden and Mick Murphy, little has been revealed about the project so far. However, guest musicians including Dave Grohl (Foo Fighters), Pat Smear (Foo Fighters), Drew Hester (Foo Fighters, Taylor Hawkins and the Coattail Riders), and Rami Jaffee (The Wallflowers) have been confirmed.

The track listing for the album is as follows:

1. The Ballad of the Birds of Satan
2. Thanks for the Line
3. Pieces Of The Puzzle
4. Raspberries
5. Nothing at All
6. Wait Til Tomorrow
7. Too Far Gone to See

The Birds of Satan is available for pre-order now.