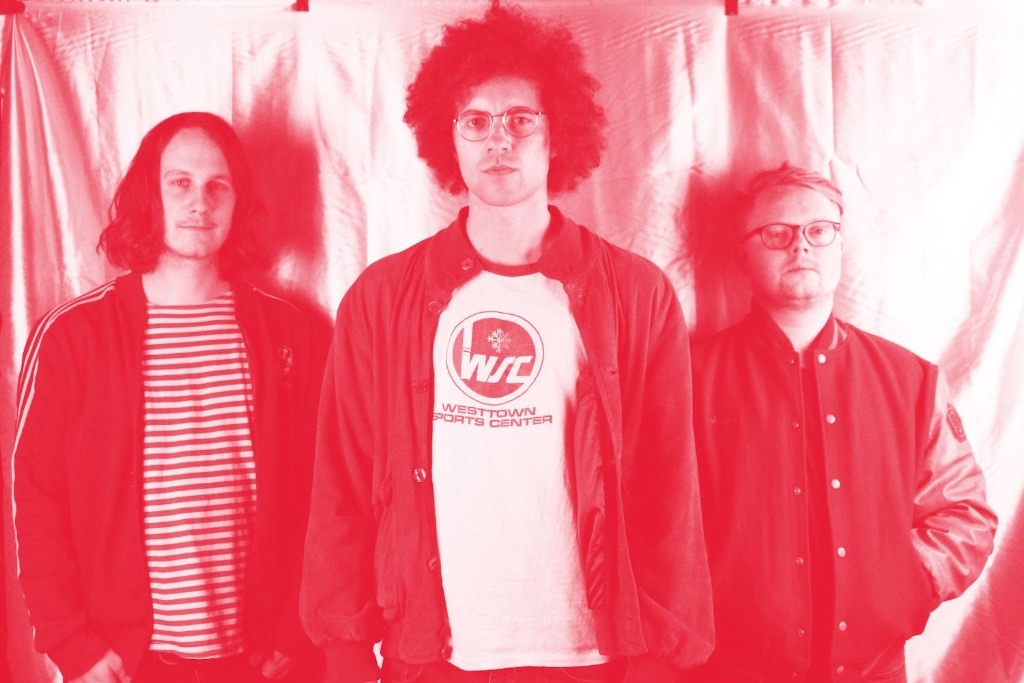 Brighton-based trio The Physics House Band are back with their boundary-breaking take on jazz-influenced psych-rock as they announce their first record in four years with new mini-album ‘Mercury Fountain’, due April 21st via Small Pond Records. They are streaming the first single ‘Calypso’ online now.

‘Mercury Fountain’ follows 2013’s EP ‘Horizons/ Rapture’, which sold out twice over on CD & vinyl and allowed the band to pick up quite a fan base, including Stewart Lee who wrote a little bit about the band below.

By Stewart Lee:
[quote style=’1′ cite=”]“I’m nearly 50. I don’t know what’s going on anymore, I’ll admit. The internet’s availability of all sources ever simultaneously has destroyed my understanding of cultural development as a logical progression.  All music is time travel, forward and backward both at once, now.

But three years go my friend Simon Oakes, of prog-psych conceptualists Suns Of The Tundra, directed me to a YouTube clip of The Physics House Band. Impossibly youthful looking, and sounding like vintage seventies stadium-prog behemoth, but stripped of any errors of taste and judgment, fed amphetamines, made ashamed of their record collections, slapped in front of the whole school, immersed instead in post-rock procedure and practice, and made to apply their obvious talent and ability to a more worthwhile end than their forebears.

Three years on here’s their second record, a super-dense sci-fi mindfuck of a thing, music scholarship charity case keyboards in combat with squally spacerock guitars, dub boom bass and multi-time-sig clatter; a territory staked out over mushrooms at break-time, on the top floor of the multi-story car park, overlooking the ‘70s Bauhaus shopping centre concrete functional fountain square, but now gone all Escher in the aftermath, like a black and white architectural schematic drawing dipped in tie-dye.

‘Mercury Fountain’ doesn’t stop, a twenty nine minute surge of tracks that it would be a crime to split apart, the kind of part work The Physics House Band’s progenitors aimed at but never quite produce. It loads you into a water canon and shoots you out through its intermingled opening tracks, the group finally allowing you a pause for breath at the half way point, during ‘A Thousand Small Spaces’; and then you’re kicked out of the airlock back into the Negative Zone again in ‘Obidant’, the laws of physics in reverse, Newton’s apples flying upwards past your grasping fists, your hair on end, arching to follow them, until you’re finally abandoned into the techtonic drift of ‘Mobius Strip II’.

It’s a two black Americano experience that makes me wish I still had pin-sharp hearing to lose.”[/quote]

Named after a sculpture by Alexander Calder, which Adam stumbled across in a gallery in Madrid, the record is about a hallucinogenic journey through the mind, parallel universes and the astral plane, using the allegory of diving into a Mercury Fountain. The first half focusses on exploring different realms, scenes and situations – gaining knowledge and understanding as you go. The second half of the record embarks on an intense journey through fury, violence, madness and bliss, using all the knowledge and understanding gained in the first half. The album ends the same way that it begins: emerging from the Mercury Fountain, only to dive straight back in.

Recorded with Joel Magill & Raven Bush at Wicker Studios in Kent, ‘Mercury Fountain’ uses a wealth of vintage microphones, amplifiers, drum sets and synthesisers, featuring a Wurlitzer, a couple of 70s Moogs, a roland string RS202, and even a bizarre Russian Moog copy. For The Physics House Band, experimentation is key and a large part of the recording and writing process. The group had a little help from their friends to create ‘Mercury Fountain’, with Raven Bush on violin, ‘Biscuit’ on jazz flute and ‘Willy G’ on saxophone.

After playing shows with the likes of Alt-J, Jaga Jazzist, Django Django, 65daysofstatic, Three Trapped Tigers, Mono + more, The Physics House Band are set to tour the UK this May, with more dates to be announced soon.