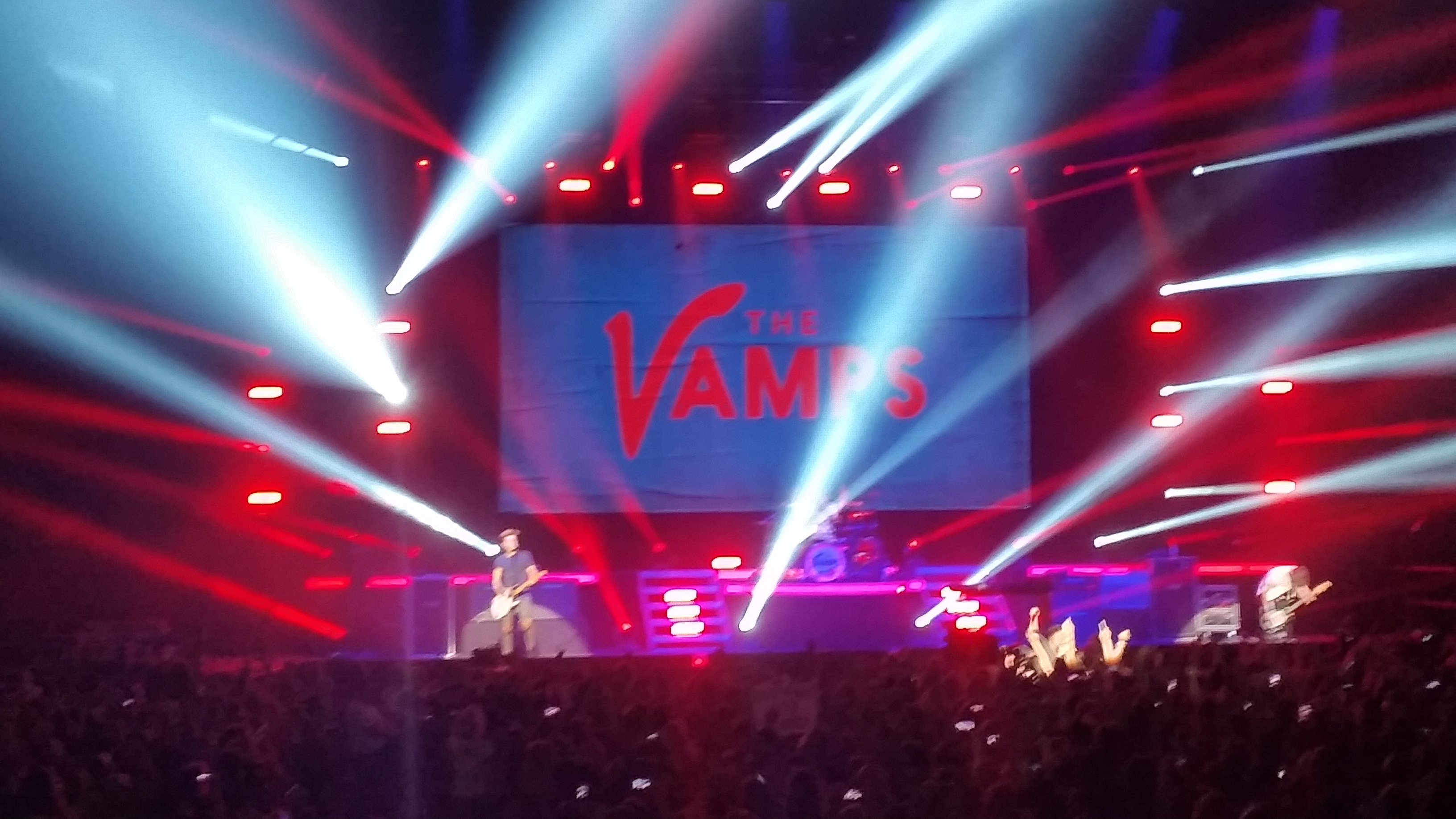 With boy-bands cropping up every five minutes; it takes something special for the general public to take note. Whilst shows like X-Factor pre-prepare fan bases and shove the marketing down the throats of audiences well before a single song is released; all competitors (winners or not) of the show have a ready-made audience to walk into. THE VAMPS on the other hand, have YouTube to thank for their success – in both finding each other and developing their audience.

Tonight the quartet are mid-way through their first ever headline tour at the NIA in Birmingham – no X-Factor shows, no voting, or no ‘sing-offs’ got them there. Instead, the band all individually uploaded covers onto YouTube as young teenagers; finding each other to write songs together (ok, thats a slightly condensed version of what happened…). The band used the video sharing website to record covers, gaining the attention of many, many people. With two of The Vamps members from the second city – this show is as close to a home crowd as can be – and boy did it feel like it.

The lights dropped and the two giant screens turned on – showing the music video for ‘Oh Cecilia’; not that you could hear it, this alone provoked deafening screams in the sold out arena. Once the song finished, the four members bounced onto the simply designed stage to launch into album opener ‘Wild Heart’. Again, the crowds screams seemed to completely overwhelm the sound – a sign that this band really, really do mean a lot to so many people.

Frontman Brad Simpsons dominating presence on the stage was quite unique for a boy-band. There was no choreography, he bounced around the stage in a similar manner to Ricky Wilson (of Kaiser Chiefs). It was equally refreshing to see them all take up instruments, the acoustic feel ‘Girls On TV’ saw how naturally these stages now come to them; the fans singing along to every word of what is sure to be a single in the coming months.

The momentum maintained during a four pop-song covers medley; a nod to the bands roots. The tracks were back by the giant screen showing the videos they uploaded to YouTube from their bedrooms before they were famous – a nice touch. It really didn’t matter what the band had played; the audience were captivated. However, it seemed to lose it’s way as the three members left the stage to leave Tristan Evans; the bands drummer, playing a solo – which seemed to last forever. Over a backing-track of dubstep and rock, it seemed to unnecessarily draw away from their performance.

Once they returned, it instantly get back up to tempo with the global hit ‘Somebody To You’, which received the biggest cheer for the night. The band then played another medley of covers; this time led by bassist Connor Ball – the unusually rocky All Time Low and Fall Out Boy tracks of ‘Dear Maria, Count Me In’ and ‘Sugar, We’re Going Down’ were chosen. They weren’t ‘popified’ covers to appeal to the audience; instead, they wouldn’t feel out of place at Sonisphere Festival, it really brought home the diversity of the group. There was also another cover of My Chemical Romances’ ‘Teenagers’, with a superb guitar solo by James McVey; with enough time to tease fans with the prospect of another tour coming next year (again reducing the crowd to hysteria).

The crowd maintained the off-the-charts levels of excitement for the final tracks ‘Oh Cecilia’ (which features the chorus of the famous Simon & Garfunkel track) plus the encore of the anthemic ‘Risk It All’ before rounding out their set with their first charted UK single ‘Can We Dance’.

The show was simplistic; the odd firework went off and the use of the confetti-cannon, however this wasn’t a performance based on pyro, this was down to the song delivered by The Vamps. Its no surprise they have such an engaging fan base, their live shows are engaging and unexpectedly faultless.