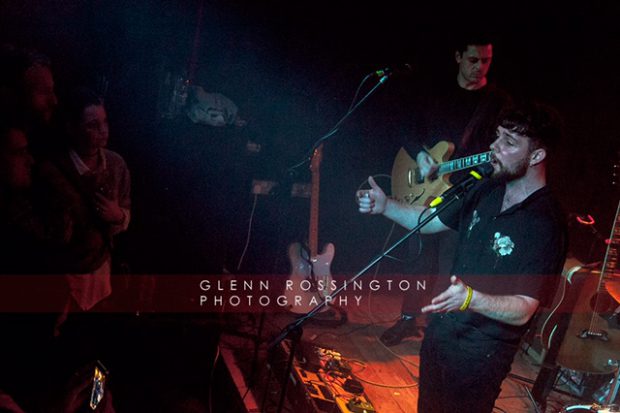 Tom Grennan performed in one of Birmingham’s most intimate venues last night and if you haven’t heard the name Tom Grennan before, then you heard it here first and you are bound to see it splashed all over the media this summer.

Up and coming Bedford born Singer/Songwriter who is now based in London, is hard to pin point. It’s difficult to put him into any one genre or influence; but to put it differently – It’s like Grennan walked in to a party with Plan B and Ed Sheeran and then went out for after-party drinks with George Ezra. In a word… it’s ‘Refreshing’.

Performing to a crowd no bigger than 200 people, Tom spoke to the crowd confidently but also on a personal level. “We’ll all have a drink later, sound good?” he said after the first half of the set. Performing his brand new single ‘Praying’ and an acoustic version of his feature on the Chase & Status track ‘When It All Goes Wrong’ Grennan defied the typical standards of an acoustic singer/songwriter.

A handful of the tracks performed tonight saw Tom put down his guitar, leaving the chords to his backing player, and really give it his all vocally. Accompanied by just an acoustic guitarist and a keyboard player, tonight’s gig was intimate in it’s truest sense. Although a short set lasting roughly 45 minutes, this young man proves he has the talent to continue. It really did feel like one of those “I was there then” moments.

Supported by three-piece band Cuckoolander. The line up includes a male lead guitarist who was sandwiched in between two talented female musicians on bass guitar and drums. As with Grennan, they were difficult to categorise and although hardly engaging with the crowd who were eagerly anticipating the headliners’ stage time; their hypnotic sound backed by powerful female vocals drew the crowd in for what was to be an awesome evening. They will be performing, alongside Tom Grennan, at this years’ Dot To Dot Festival in May.

Tom is currently on tour in the UK, America and Germany to promote his new single ‘Praying’ which is out now to coincide with his second EP release entitled ‘Release The Brakes’ out March 10 available on iTunes and Spotify.