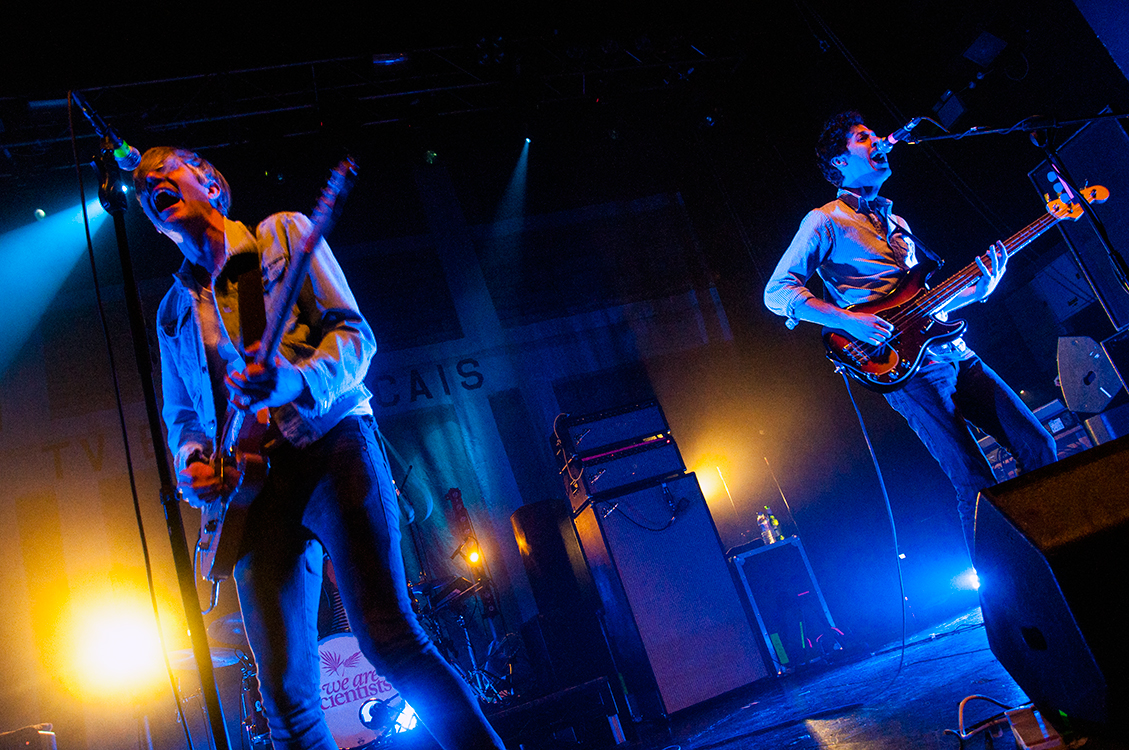 Indie rock three-piece We Are Scientists have carved out a successful niche for themselves with their brand of danceable guitar pop. Since forming in California back in 2000, however, they’ve become more associated with the Big Apple and its incessantly productive music scene. Certainly, their music is more Brooklyn basement than OC beach party, but it’s their downright, unabashed geekiness that makes them feel more East Coast than West. Tonight, though, it’s all about the Midlands, their apparent inclination for smashing Brummie curries, and of course, their new album, TV en Franҫais.

Opening the show are Morecombe rockers THE HEARTBREAKS. The room isn’t yet even half full, but from the off they throw themselves fully into their brief but memorable set. While their stage attire makes it look like they’re trying to cover every decade since 1950, their sound is much more coherent. Most recent single ‘Hey Hey Lover’ is a riotous, soul-influenced piece of Northern rock in which vocalist Matthew Whitehouse’s Clapton-esque drawl blows up for its euphoric choruses. They certainly make quite the impression.

Next up is Birmingham four-piece SUPERFOOD, whose local reputation in the second city is rapidly becoming a national, and international, one. Their fuzzed out, slacker vibe couldn’t feel further from We Are Scientists’ slick, watertight style, but their sheer exuberance, alongside some seriously catchy tunes, make it easy to see why they’re on the bill. ‘Bubbles’ and ‘Melting’ are included from their recent MAM EP, as is the brilliant, tunnel vision-inducing ‘TV’. Closing with their eponymous (and first ever) track, they have the audience dancing and cheering long before the end of what seems like a disappointingly short time on stage. With their debut album recorded and on the way to being released, however, it shouldn’t be too long before they’re securing that coveted headline slot for themselves.

When the main act appear, it’s to rapturous cheers from every level of the Institute’s cavernous main room. Playing a crowd-pleasing mix of tracks from across their four most recent albums, WE ARE SCIENTISTS have their audience enamoured from the get-go. Opening things up with the epic ‘Return the Favour’, its atmospheric, reverberating guitars and Keith Murray’s impeccable blend of deeper and falsetto vocals are as impressive as ever. Piling straight into ‘Dumb Luck’, the crowd really get going, and from there the set runs like clockwork.

With their live sound so perfectly rehearsed, the real unexpected thrills at any WAS gig come with the magnificent on-stage banter between Murray and bassist Chris Cain. Their sharp responses to both each other and the crowd are a league ahead of the standard, ‘thanks for coming’ stage patter that many bands can barely muster the energy for.

Before launching into first album favourite ‘Nobody Move, Nobody Get Hurt’, Cain says in his typical deadpan manner, “If you know it then sing along; if you don’t, clap. Even a common fucking idiot can clap along.” When someone immediately starts clapping, the response is instantaneous: “You’d have to be incredibly intuitive to clap before the song has begun”. It has the room in stitches, as does pretty much everything else they have to say this evening.

Ultimately, however, the fans are here for the music, and they certainly get their money’s worth. All but the slowest songs have the whole room throwing enough shapes to give Sesame Street a run for their money. ‘Rules Don’t Stop’, ‘It’s a Hit’, and ‘Textbook’; there are plenty of oldies in the mix, and the crowd are singing every word (when they can catch their breath, at least). While, as always, newer tracks don’t quite have the same impact just yet, the response to the night’s final song, ‘Slow Down’, is about as chaotic as the band could hope for, and when they leave finally leave the stage, their grins say it all.

The energy and passion WAS inspire in their fans doesn’t seem to have changed in the decade since their breakthrough album, and that kind of longevity happens for a reason. While their music may not have changed much in the intervening years, their live show’s reliable blend of disorderly humour and impeccable musicianship should see their tours selling out for a few more years (or decades) to come.