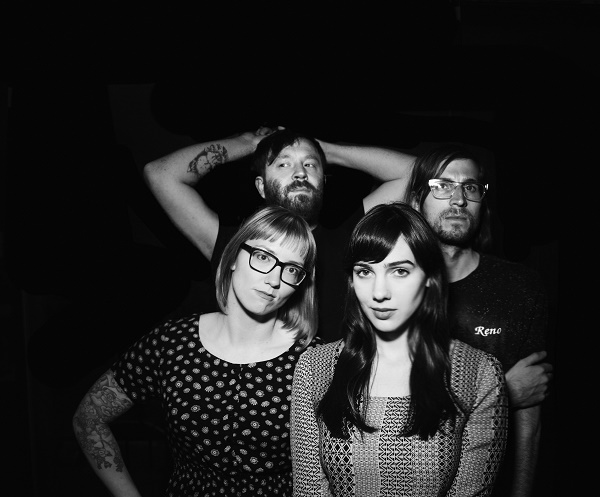 The moniker may imply quiet, timid, and irresistibly cute, but the thunderous drum beats that mark the beginning of Field Mouse’s new track ‘Everyone But You’ suggest quite the opposite. Instead, Field Mouse’s most recent track is a scuzzed out, over-driven, utterly brilliant piece of shoegaze, crammed full of power chords, mesmerising layers of effects, and topped off with the crystal clear vocals of lead singer Rachel Browne.

Browne’s musical journey supposedly started in 1999, when she entered a make-your-own-CD record booth to record a cover of No Doubt’s seminal girl-rock classic ‘Just a Girl’. A few years later she met Andrew Futral as a student at SUNY Purchase, and in 2010 Field Mouse was officially formed. As a duo, they released their 2012 single ‘You Guys Are Gonna Wake Up My Mom’, a floating mass of dreamy vocals and shimmering guitars with a sharp, distorted undertow. However, it was with the addition of Saysha Heinzman (bass) and Tim McCoy (drums) that the line up was completed, and the real work could begin.

In the spring of 2013, the band supported Laura Stevenson (who we were lucky enough to catch here in the UK earlier this year) on her US tour, and with that experience to draw on, they were finally ready to start work on their first full-length effort, setting themselves up in their native Brooklyn to get the tracks down.  Few of those songs have so far been revealed from the album, called Hold Still Life, but already it’s enough to have industry ears pricking up, and while ‘Everyone But You’ feels much heavier than anything they’ve produced to date, the same lofty melodies and irresistible hooks are there to be seized upon.

The band currently have no announced UK dates, but they’ll probably get snapped up pretty quickly, if the rest of the album is as good as this song suggests.

Hold Still Life is out on July 22nd via Topshelf Records.