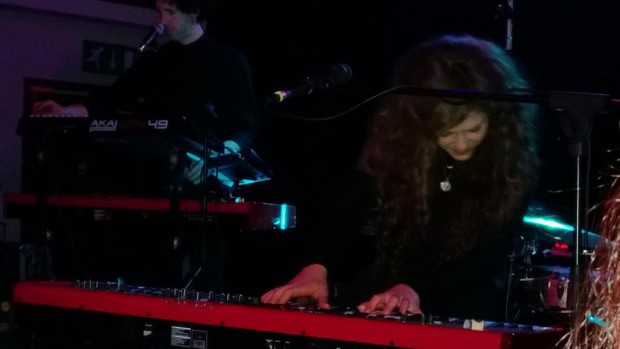 Its been a far from quiet year for RAE MORRIS. Recently coming off tour with Bombay Bicycle Club, where she not only provided a superb support slot (which caused the crowd to be pin-drop silent); she also appeared alongside the Crouch End quartet for the single ‘Luna’. Her gorgeous harmonies; complementing Jack Steadmans’ voice on the faux-dance anthem, has given fans of the London group the opportunity to delve into her own solo-music. With an album expected to be released in the Autumn, Rae continues her momentum with a very intimate UK tour, which stopped at the Temple bar within the Institute in Birmingham.

It was the beautiful duo of Cannon Street which opened the evening. With just one acoustic guitar; the two sisters had equally impressive voices which worked together effortlessly. In the same spirit of First Aid Kit, the pair hushed the modest crowd. The band, who are from Birmingham however are based in London collected a warming applause as their short set concluded and left the stage safe in the knowledge they had gained a fair few more fans.

The second support slot was filled by a solo performance by Matt Sheehan. The stripped back set of tracks from his Finding My Feet EP; including stand-out track ‘Cold’, were greeted with huge applause by the filling venue. Whilst recording music with a full band; Matt’s solo performance; with just an acoustic guitar, is sublime; offering a solo Charlie Simpson feel about his music yet delivered with far more raw emotion.

It was a relaxed evening for Rae Morris; with her family enjoying the show from the crowd, the Blackpool singer-songwriter joined them to mingle during the opening acts. As her stage time neared; she disappeared backstage, only to return minutes later with her three band members. As she took her seat, centre stage being her piano the opening notes began of ‘Grow’. With the addition of an electric guitar; not present on the EP version, the track was brought to life, yet no instrument can overshadow the gorgeous tone and uniqueness present in Rae Morris’ voice.

Whilst the crowd tried to applaud, the singer had already began the opening notes of ‘Way Back When’; taken from the same EP as her opening track. This is the first opportunity to show the strengths of her fellow musicians; naturally harmonising with her female drummer. Similarly to her show with Bombay Bicycle Club, the crowd were once again silent.

The singer is set to have an exciting 2014; not only with a full-length album teased on the horizon, but another new EP, which is scheduled for release this weekend. Whilst the set-list felt familiar with songs already available, the Temple crowd were teased with new material, including her piano ballad ‘Unguarded’, set to be on the EP released this week; which erupts at the chorus to show her full, impressive vocal range.

It was ‘Skin’ which proved to be one of the fan favourites; the track; which is a free download on the singers website, saw the first cheer during the opening notes. Throughout the track; and indeed the whole set, the singer sat behind her piano and appeared to enjoy her time in Birmingham. The track, perhaps the most delicate of the set; echoed around the Temple bar. The powerful chorus reverberated around the chorus gorgeously. It seemed to come too soon, however the set closer was Rae’s upcoming single; ‘Do You Even Know?’; the track, which is more dancier than her more piano-ballad led material proved to be the highlight of the set.

The singer returned for a two song encore; the first a solo performance of ‘Not Knowing’; another slow track from the Grow EP which again demonstrates the versatility in her voice. As she welcomed her band back to the stage, the evening was rounded off with the beautiful ‘From Time’.

From the opening act; the evening was filled with quality which seemed to just scratch at the surface of the emerging talent within the genre. Both Rae’s songwriting and performance abilities combine to create a stunning evening of live music. With the Do You Even Know? EP set for release next week; Rae Morris is definitely a name to look out for as the year goes on.