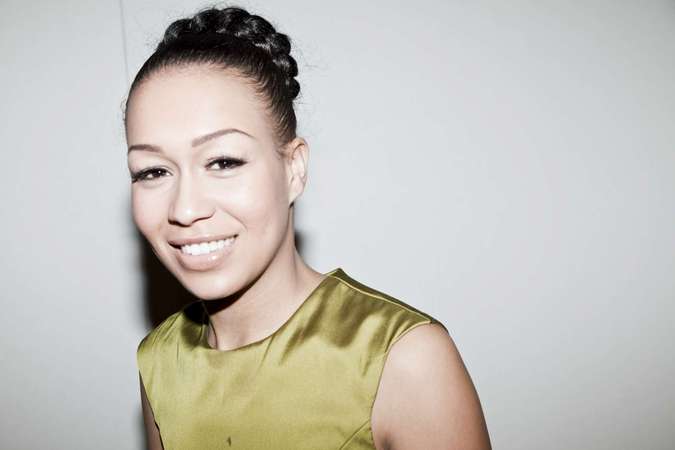 Between two gold-encrusted Greek columns the stage at Edinburgh’s Usher hall is fitted with a black and white checked floor and a faux bar to create a jazzy atmosphere. Rebecca Ferguson first made a reputation for herself as a stunningly soulful vocalist in the 2010 series of The X Factor, where she placed runner up. She has since released two full-length studio albums, and is currently touring the UK in name of her most recent album, Freedom. Edinburgh is the fifth show on the docket, just before a home performance in Liverpool.

Before Ferguson graces the stage, two support acts warm up the audience –the first performer makes sense, the second not so much. First on the stage is Phillipa Hannah, with her acoustic guitar and a percussionist to back her up. She’s a natural storyteller and her crowd-speaking doesn’t feel forced between happy acoustic pop songs about learning to love who you are. It’s a shock to the system when the second performers bounce onto the stage with high voltage dance music pumping through the speakers. Vanquish, a four piece girl-group sways on the stage looking like something straight out of the talent show scene in Mean Girls. There’s no denying that the girls are talented vocalists, and rarely a note goes flat, however their superficial teenage-pageant appearance and synchronised line dancing comes off as little more than a joke. They play mostly dance chart covers, and their style seems completely out of place with the mature demographic of the audience, especially when singing their upcoming single with lyrics repeating “I love you, freaking love you, like crazy/ You got me like damn, damn, damn /What you doing to me, yeah yeah yeah…”

As a blue light diffuses onto the prop bar, ‘Lady Sings the Blues’ by Billie Holiday introduces Rebecca Ferguson and her backup singers to the stage. The moment Ferguson breaks into one of her own songs, the crowd goes wild. For her second song she sings one of her most popular tracks from the Freedom album, ‘I Hope,’ which proves one thing; this isn’t a crowd that just adores her, this is a crowd that is irrevocably in love with Rebecca Ferguson. Every instrumental break during songs the audience filled with applause and whooping. Ferguson performed with a confident soulful demeanour, strutting back and forth along the stage with her male vocalist energetically bouncing around behind her. When she speaks there is a mild sweetness about her which is overtaken by her diva powerhouse voice. After several of her own songs, she kicks off her shoes to do a cover of Tom Odell’s hit, ‘Another Love.’ After a few more original songs she covers Katy Perry’s ‘Roar’ which raises the entire ground floor of Usher Hall to their feet.

After a 19-song set, the crowd is still completely devoted to her, raising their arms into the air and reaching out to Ferguson and her backing singer. For her last song, she dedicates ‘Nothing’s Real but Love’ from her debut album, to a couple that messaged her on Facebook that they were getting engaged. “There’s a couple in here that just got engaged… well I’m gonna’ dedicate this next song to them, and all the other love birds, and all the other people that haven’t found love yet…it’s coming.”

By the time she leaves the stage the applause is deafening, and a standing ovation spreads to all three levels of the Usher Hall main room. “You have been the best crowd yet!” Rebecca gushes as she barely remembers to grab her shoes before leaving the stage, and after the energy from that crowd, it doesn’t even seem like flattery.