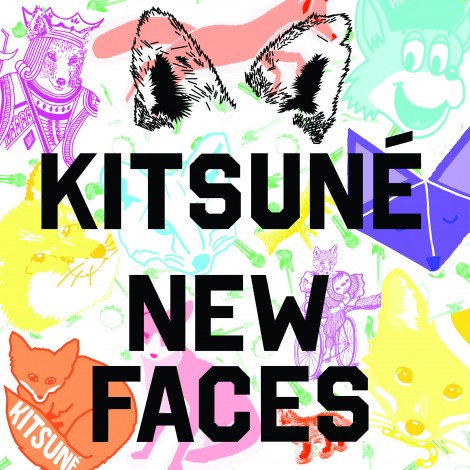 French music/fashion collective Kitsuné Maison have long established their well-earned position on the front line of everything that is cool and chic when it comes to independent and alternative music. Having broken the likes of La Roux and Two Door Cinema Club (whose debut Tourist History was released through their Kitsuné label), they have a knack for knowing (or, depending on your view, creating) buzz bands, sometimes before they can muster so much as a hum of their own.

With their latest New Faces album now available to stream, listeners are faced with yet another collection of artists who could well be set to make waves over the next few months. But who exactly made it onto the list? Here’s our track-by-track breakdown of the new compilation.

While their band name may bring to mind jagged math rock/self-depreciating smart-rock à la We Are Scientists, this Luxembourg-based psychedelic five-piece couldn’t be further removed. ‘Mossy Grounds’ is a hazy bend of atmospheric keys, soothing vocal harmonies and delicately deployed guitar lines whose transition from clean, crisp, punctuating chords to scuzzed out riffing gives the song a wonderful change in direction during its final moments.

LA-based Gallant’s distinctive falsetto and unique brand of down-beat r’n’b has earned him some serious industry buzz. His work with producer Felix Snow has resulted in the kind of raw, understated sound that brings to mind The WEEKND and Frank Ocean, and ‘Sirens’ is a typical example. Stunning voice aside, it strikes the perfect balance between cold, almost brutal beats and electronics, and Gallant’s stunningly beautiful, humanizing melodies.

Soundcloud superstar Lxury has already clocked up more than 1 million hits on the two tracks he’s so far released, ‘J.A.W.S’ and ‘We Do’. Despite being a relative newbie, however, the British producer has racked up some impressive support, including getting the seal of approval from Disclosure, no less. New track ‘Never Love’ makes it easy to understand why, with its mixture of dub bass hits and upbeat, infectious electronics.

Solomon Grey, otherwise known as Tom Kingston and Joe Wilson, have travelled a pretty long road to reach this compilation. Forming in Oxford in 2009, they can already count a lighthouse in Ireland and a farm in the Australian outback as some of the more interesting places they’ve been able to live and write before their return to the UK in 2012. The travelling has clearly done some good, as ‘Last Century Man’ goes to prove. Its combination of Bon Iver-esque falsettos, cliché-free instrumentation and minimalistic beats makes this a heart-stopping listen

The album changes tack with Belfast-born brother-sister pair Southern, whose swinging, bluesy guitar lines and infectious rhythms put them firmly back into rock’n’roll territory. While they are now based out of Liverpool, there’s more of the jagged Southern rock of the White Stripes or The Black Keys in ‘Shout It’, their contribution to the compilation. With boy-girl vocals and riffs a-plenty, the comparisons are more than justified.

Years & Years describe themselves as creating ‘soulful electro-pop’, and that’s a pretty good way of putting it. ‘Real, the title track from their most recent EP, is being released by Kitsuné’s own label, not surprising once you get an earful of its contagious rhythms, and lead singer Olly Alexander’s soulful falsetto. Think La Roux, but with more substance.

One of the higher-profile artists included in the compilation, George Fitzgerald’s reputation as a producer and DJ is already fairly well established. Mixing grime, house and garage influences, his remixes and original tracks have already caught the ears of the UK and Europe’s dance aficionados, as well as Domino Records (whose off-shoot Double Six snapped him up last year). Listening to ‘I Can Tell By The Way You Move’, released as a single last summer, it’s not difficult to understand why he’s gained such positive attention amongst a raft of similar artists.

There’s nothing soft and fluffy about Panda, otherwise known as Dutch drum and bass producer Pieter Hooghoudt. In his down time from running the Panda Mix Show on Youtube (which boasts the likes of Sub Focus and DJ Fresh as guest mixers), he fits in a pretty successful career mixing in his own right. ‘Eighty-Nine’ may leave you longing for the summer’s long nights and late-night parties, but it’s fair to say that, when those do eventually roll around, Panda will be featuring on the bill.

Bristol-based producer David Corney, otherwise known as Hyetal (it’s easy to understand the alias in this case) has been quietly building a reputation as one of the best up-and-coming dance producers in the UK. Since releasing his debut album Broadcast back in 2011, he’s established himself as a bonafide synth-maestro and master of the ‘neon electronica’ sound. ‘Jam the Network’, taken from his follow up Modern Worship, is a trippy, wall-of-sound-style assault of grimy bass lines and frantic electronics.

It’s an odd transition from the dance/electronica of the past few tracks into Birmingham four-piece Superfood’s ‘Bubbles’. Taken from their recently released MAM EP, it’s a scuzzy, 90’s-influenced piece of indie rock that draws its sound as much from Seattle’s grunge scene during the first part of that decade as it does from the Brit-pop of their late-90s counterparts. We’ve already had plenty to say about Superfood, and it seems a fair bet that they could have a pretty big 2014 ahead of them.

Their moniker may sound like it should be a cereal-chomping dinosaur, dreamed up by a marketing team somewhere in the recesses of a giant multi-national food corporation, but Australian 5-piece Snakadaktal are in fact purveyors of some truly beautiful dream-pop. Taken from their debut LP Sleep in the Water (released back in 2013), ‘The Sun II’ is awash with understated electronic pulses, frenetic rhythms and prominent but delicate guitars, the latter of which invite comparisons with their Australian peer RY X and his ‘Berlin’ EP.

Another song, another house/electro producer. This time up it’s London-based producer Clancy with ‘Overdue (Edit)’. Cut down from its original 6-minute run-time, it’s a bass-heavy mix that sits firmly at the deeper end of the house spectrum. Officially released back on February 10th, it’s ambient without taking too much of a back seat, and has enough of a kick in its synth riffs and vocal samples to grab your attention, at least for a while.

Alternative hip-hop artist and all around creative type Kilo Kish (real name Lakisha Kimberly “Kish” Robinson) may already be familiar to fans of neo-soul pair The Internet, having featured on their track ‘Ode to a Dream’. While she still has just two EPs behind her (most recently K+), ‘Turqoise’s accomplished mixture of laid-back lyricism, jazz horns and unpredictable rhythms promises big things from her future projects.

There’s little of her Devonshire upbringing in Rosie Lowe’s haunting track ‘Me and Your Ghost’. A rather downbeat way to bring the compilation to an end, its minimalistic yet soulful sound in the opening two minutes leaves her rich vocals squarely at the forefront of the mix, as she sings “You were busy going underground when I needed you the most”. Angry electronic beats struggle to make themselves heard in the song’s more textured second half. All in all, a genuinely original and curious composition.